Tales From Azar’s Attic:: A Look Inside a Broadcasting Career (Paperback) 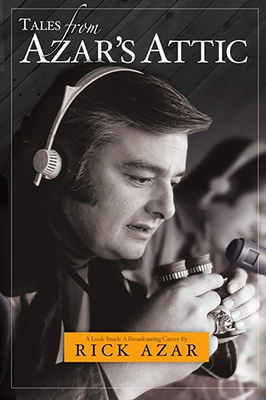 Tales From Azar’s Attic:: A Look Inside a Broadcasting Career (Paperback)


Special Order—Subject to Availability
Rick Azar. For many, this name evokes a wave of wistful nostalgia. A member of the charismatic trio “Irv, Rick and Tom” on WKBW-TV that dominated the Western New York and Southern Ontario airwaves for nearly two decades, Rick Azar tells engaging stories about so many historical beginnings. His tales chronicle the birth of broadcasting, the contentious start of the Sabres and the beginning of the Buffalo Bills. Azar shares fascinating behind-the-scenes encounters with some of the colorful celebrities he interviewed – and, more often than not, befriended – over the decades. Meet Howard Cosell, Jack Kemp, Joe Namath, Ted Williams, Gil Perreault, Wayne Gretzky, Floyd Patterson, Ilio DiPaolo, Jack Nicklaus, Dizzy Gillespie, and so many more. Azar’s journey from Brooklyn to Buffalo, on the stage and on the air, covering sports and offering commentary, is entertaining and insightful. It also reveals much about Buffalo, his beloved hometown.
A professional broadcaster for more than 35 years, Rick Azar was a radio announcer while still in high school. After graduating from Canisius College, he pursued a theatrical career in New York City. His radio career began in Niagara Falls at WUSJ and WHLD, where he hosted Azar’s Attic, a jazz show. He then worked for NBC radio in New York City before transitioning to television in his hometown of Buffalo in 1958. Azar is best known as WKBW Channel 7 TV’s sports director. With Irv Weinstein as news anchor, Tom Jolls on weather and Rick Azar on sports from 1962 until 1989, “Irv, Rick and Tom” formed the longest running anchor team in television history. After retiring, Azar revived Azar’s Attic on WLHC-FM radio in North Carolina, where he lived with his wife, Edith until returning to his hometown to spend time with his children.