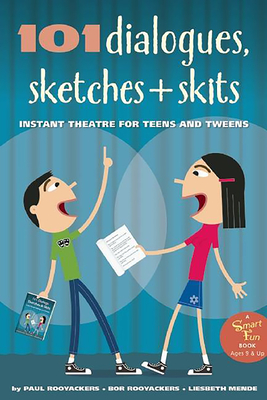 
Not On Our Shelves—Ships in 1-5 Days
Originally written for drama teachers working with students aged 9 to 18, this collection of short, snappy theater dialogues makes the perfect short break activity in any classroom, camp, or youth group situation. Students get much more out of these dialogues than just acting practice: they increase alertness, cultivate curiosity, boost literacy, and improve school attendance. The one-to-one dialogue format facilitates friendships and allows shy students to demonstrate new skills. Written by a family of drama experts, each dialogue centers around a theme related to young life: food, parents, hobbies, movies, even falling in love, to name just a few. Each dialogue is introduced with brief notes suggesting different ways of playing them at different ages and tips for adapting the dialogues to different age groups and situations. 101 Dialogues, Sketches, and Skits is part of the SmartFun Activity series from Hunter House, which includes over 25 titles that have sold more than 200,000 copies to date.

Paul Rooyackers is a well-known dance and drama teacher with over 20 years experience in children's education, including youth work and creative therapy. He is the author of many activity books for children published by Hunter House and also by Panta Rhei in the Netherlands, where he lives. These include 101 Dance Games and 101 More Dance Games, 101 Drama Games and 101 More Drama Games, 101 Language Games, and 101 Circus Games for Children. Paul lives in Haarlem, The Netherlands. Bor Rooyackers is a well-known actor, director, cabaret performer, and stand-up comedian. He's the son of Paul Rooyackers, lives in Rotterdam with his wife Liesbeth Mende, and performs with a cabaret troupe throughout the Netherlands. Liesbeth Mende studied play writing at the Academy of Arts in Utrecht. She is an author and a teacher of creative writing and play writing.

"DORA — And during summer. You have a summer job?
NICK — Usually for the first four weeks I go . . .
DORA — Apple picking? Strawberry picking? Tomato picking? Dish washing?
NICK — And then . . .
DORA — To Mexico for a week!"
— from the book