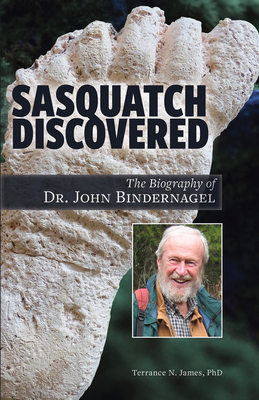 
Backordered
Sasquatch Discovered is the biography of Dr. John Bindernagel ? Canada's foremost sasquatch/bigfoot investigator. His intense childhood curiosity about the natural world, with a particular interest in ornithology, led to his involvement as a Junior Naturalist and his teacher dubbing him ?the scientist? for his in-class contributions. By high-school, he was practicing good curatorial habits as he collected specimens for the museum he created in the family home. While in university, he was intrigued by the story of an ?ape-man? in British Columbia. During his time in Africa, he became familiar with the great apes and hypothesized the Sasquatch as North America's great ape. On return to Canada, he chose to live in the Comox Valley, on Vancouver Island, B.C., and closer to the west coast rainforests? prime Sasquatch habitat. Here he aimed to study and pursue research on this elusive animal. John Bindernagel was the author of two seminal books, a popular conference speaker throughout North America, and the Canadian news media ?go-to guy? for Sasquatch information. He was beloved by eyewitnesses and amateur investigators alike but largely dismissed by the scientific community. This book is a tribute to an upstanding man who followed his call and his passion at great personal and professional expense. He spent his last years championing the unfolding story of the discovery of the Sasquatch. This is his life's story.
Dr. Terrance James is a retired educator who taught at elementary, secondary, and post-secondary levels. He enjoyed a year in Costa Rica with the International Schools Organization and a short-term in Gaza with a CIDA project. He has a M.Ed in Educational Administration and a PhD. in Educational Psychology. He is also a private practice rehabilitation consultant. He has authored/co-authored three books on Prader-Willi Syndrome, and six books on educational and local history topics. Terrance and John Bindernagel enjoyed a 25-year friendship during which Terrance vicariously participated in John's sasquatch research and sympathetically supported his frustration with the scientific community. Terrance James and John BindernagelIt was John's request that the unfolding story of the discovery of the sasquatch be told. Terrance has honoured that request with his friend's biography, Sasquatch Discovered: The Biography of Dr. John Bindernagel. Terrance resides with his wife, Joan, in the Comox Valley on Vancouver Island, not far from Strathcona Park where John cast sasquatch footprints.