Secrets to Spiritual Power: From the Writings of Watchman Nee (Paperback) 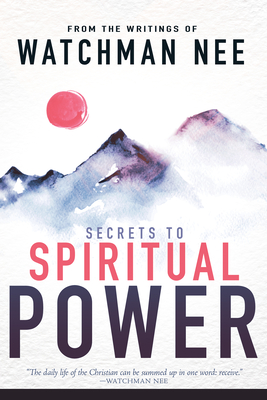 Secrets to Spiritual Power: From the Writings of Watchman Nee (Paperback)


Not On Our Shelves—Ships in 1-5 Days
Watchman Nee experienced such a close intimacy with the Lord that many remarkable insights into triumphant Christian living were revealed to him by the Holy Spirit. Now these truths are available to you so that you can have the same kind of vibrant relati.
Watchman Nee (1903-1972) was born in China and given the name Ni (Nee) Shu-Tsu. At seventeen years of age, he wholeheartedly accepted Christ, and he sought and received the power of the Holy Spirit for ministry in 1922. In 1926, he contracted tuberculosis and was not expected to live. In spite of weakness and a high fever, he wrote his three-volume work The Spiritual Man, which he wanted to leave as a spiritual legacy after he died. However, Nee was miraculously healed by God after several months of illness, and he completed the work in 1928. In 1934, he married his wife, Charity. Having a photographic memory, Nee felt that the Lord was calling him to be a "watchman" for his fellow Christians in China, and so he began to read everything he could about the Christian faith. God used him not only to convert many to Christ, but also to plant many local fellowships throughout China and Southeast Asia. Nee also authored numerous books on the Christian life. Watchman Nee continued faithfully in the service of his Lord until the Communists imprisoned him in 1952, where he was confined until his death in 1972.