Where the Sea Breaks Its Back: The Epic Story - Georg Steller & the Russian Exploration of AK (Paperback) 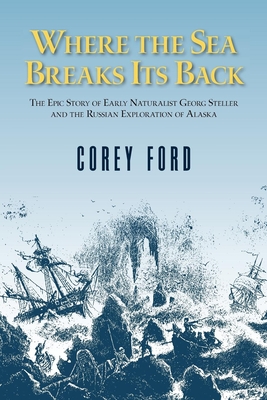 Where the Sea Breaks Its Back: The Epic Story - Georg Steller & the Russian Exploration of AK (Paperback)

Steller was one of Europe's foremost naturalists and the first to document the unique wildlife of the Alaskan coast. In the course of the voyage, Steller made his valuable discoveries and suffered, along with Bering and the crew of the ill-fated ship St. Peter, some of the most grueling experiences in the history of Arctic exploration. First published in 1966, Where the Sea Breaks Its Back was hailed as among this country's greatest outdoor writing by Field & Stream magazine, and today continues to enchant and enlighten the new generations of readers about this amazing and yet tragic expedition, and Georg Steller's significant discoveries as an early naturalist.

Corey Ford (April 29, 1902 - July 27, 1969) was an American humorist, author, outdoorsman, and screenwriter. Ford was an exceptionally talented and versatile writer. He published thirty books and more than five hundred magazine articles, with a gregarious sense of humor, a love of dogs as well as the "underdogs." He was a member of the Algonquin Circle which included James Thurber, Robert Benchley, and Dorothy Parker. During Ford's many trips to Alaska he met with Clarence Rhodes, Governor Gruening and Frank Dufresne, the first game commissioner of the Alaska Territory.

"I consider this an extremely good book. My own copy is practically worn out."

"Basing his story on Steller's journals and other relevant material, Ford writes with authority and clarity, grace and truth."