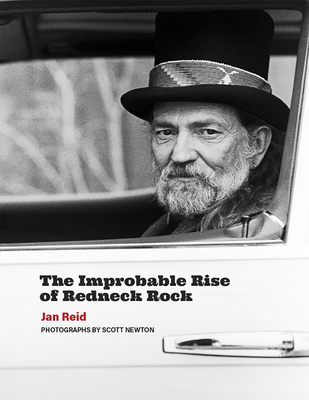 
Not On Our Shelves—Ships in 1-5 Days
First published in 1974, The Improbable Rise of Redneck Rock grew out of a magazine article coauthored by Jan Reid. His first book was a sensation in Texas. It portrayed an Austin-based live music explosion variously described as progressive country, cosmic cowboys, and outlaw country. The book has been hailed as a model of how to write about popular music and the life of performing musicians. Written in nine months, Reid’s account focuses on predecessors of the 1960s and the swarm of newborn venues, the most enduring one the justly famed Armadillo World Headquarters; profiles of singer-songwriters that included Jerry Jeff Walker, Michael Martin Murphey, Steven Fromholz, B.W. Stevenson, Willis Alan Ramsey, Bobby Bridger, Rusty Wier, Kinky Friedman, and the one who became an international star and one of America’s most treasured performers, Willie Nelson; and the rowdy heat-stricken debut of Willie’s Fourth of July Picnics.

Though Reid has resisted the writerly trend of specialization in his career, his debut brought him back to popular music and musicians’ lives in Layla and Other Assorted Love Songs, Texas Tornado: The Music and Times of Doug Sahm, and now a related novel, The Song Leader. The Improbable Rise of Redneck Rock is a landmark of popular culture in Texas and the Southwest. Readers will be glad to once more have it back.
A wide-ranging Texas Monthly contributor for over four decades, JAN REID wrote acclaimed nonfiction books from The Improbable Rise of Redneck Rock to his awards-winning biography of Texas Governor Ann Richards, Let the People In. His novels Comanche Sundown and Sins of the Younger Sons won prestigious fiction of the year awards.