Cotton Davidson - The Rifleman of the AFL (Hardcover) 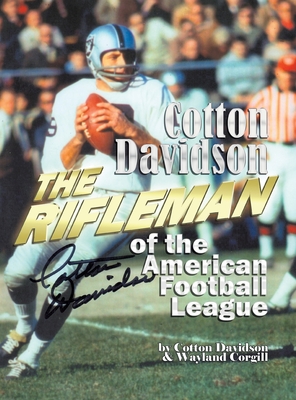 Cotton Davidson - The Rifleman of the AFL (Hardcover)

Cotton Davidson, the Rifleman of the AFL ($47.95/ Texas Book Publishers Association) is a heartfelt memoir of Francis Marion "Cotton" Davidson and the motivating story of his rise from simple beginnings in a small central Texas town to a legendary professional football career. His athletic career began at Gatesville High School and led to a scholarship to play football at Baylor University. As quarterback, Davidson lettered for the Bears from 1951-53 earning the nickname "The Rifleman" for his bullet-like passing game. He caught the eye of pro recruiters and was the first round draft pick in 1954 for the Baltimore Colts. After being drafted and serving his country in the Army, Davidson returned to pro football where he enjoyed a lengthy career playing for the Dallas Texans (Now Kansas City Chiefs) and then the Oakland Raiders. Also an accomplished punter and placekicker, he was selected to play in the AFL all-star game in 1961 and 1963. Upon retirement from pro football, Davidson went on to become the Assistant Coach under Grant Teaff at his alma mater Baylor University. During his 21-year career coaching quarterbacks for the Baylor Bears, they won two Southwest Conference Championships and played in 20 post season bowl games. Davidson has been inducted into the Texas High School Football Hall of Fame, the Southwest Conference Hall of Fame and in 2019, he lit the eternal flame for the last time at Oakland Coliseum before the first game as the Raiders kicked off their last season playing before their move to Las Vegas. While Davidson has received great recognition for his achievements on and off the field, his greatest accomplishment is the partnership he shares with his devoted wife of 60 years, Carolyn, his four children, twelve grandchildren and now many great grandchildren.