The Other Side of the Coin: Public Opinion toward Social Tax Expenditures (Paperback) 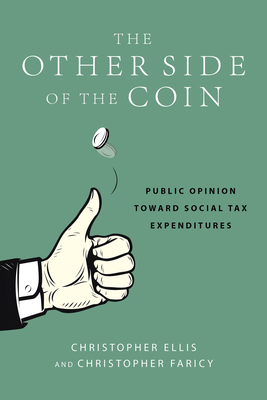 The Other Side of the Coin: Public Opinion toward Social Tax Expenditures (Paperback)


Special Order—Subject to Availability
Despite high levels of inequality and wage stagnation over several decades, the United States has done relatively little to address these problems—at least in part due to public opinion, which remains highly influential in determining the size and scope of social welfare programs that provide direct benefits to retirees, unemployed workers or poor families. On the other hand, social tax expenditures—or tax subsidies that help citizens pay for expenses such as health insurance or the cost of college and invest in retirement plans—have been widely and successfully implemented, and they now comprise nearly 40 percent of the spending of the American social welfare state.  In The Other Side of the Coin, political scientists Christopher Ellis and Christopher Faricy examine public opinion towards social tax expenditures—the other side of the American social welfare state—and their potential to expand support for such social investment.

Tax expenditures seek to accomplish many of the goals of direct government expenditures, but they distribute money indirectly, through tax refunds or reductions in taxable income, rather than direct payments on goods and services or benefits. They tend to privilege market-based solutions to social problems such as employer-based tax subsidies for purchasing health insurance versus government-provided health insurance. Drawing on nationally representative surveys and survey experiments, Ellis and Faricy show that social welfare policies designed as tax expenditures, as opposed to direct spending on social welfare programs, are widely popular with the general public. Contrary to previous research suggesting that recipients of these subsidies are often unaware of indirect government aid—sometimes called “the hidden welfare state”—Ellis and Faricy find that citizens are well aware of them and act in their economic self-interest in supporting tax breaks for social welfare purposes. The authors find that many people view the beneficiaries of social tax expenditures to be more deserving of government aid than recipients of direct public social programs, indicating that how government benefits are delivered affects people’s views of recipients’ worthiness. Importantly, tax expenditures are more likely to appeal to citizens with anti-government attitudes, low levels of trust in government, or racial prejudices. As a result, social spending conducted through the tax code is likely to be far more popular than direct government spending on public programs that have the same goals.

The first empirical examination of the broad popularity of tax expenditures, The Other Side of the Coin provides compelling insights into constructing a politically feasible—and potentially bipartisan—way to expand the scope of the American welfare state.

Christopher Ellis is professor of political science at Bucknell University.

“Tax breaks are the largest component of the U.S. welfare state, more costly than Social Security and Medicare combined. Christopher Ellis and Christopher Faricy’s pathbreaking analysis illuminates the broad political appeal of these programs in a country wary of 'big government' and obsessed with ‘deservingness.’ It also highlights the social cost—in economic inequality and unrelieved poverty—of America’s peculiar reliance on a submerged welfare state.”


“The Other Side of the Coin is far and away the most in-depth study of American attitudes toward tax expenditures. The authors find that standard models of public opinion provide an incomplete understanding of these attitudes, demonstrating along the way that tax expenditures could be a fruitful pathway to generating support for redistribution.”