Coping with Crisis: Government Reactions to the Great Recession (Paperback) 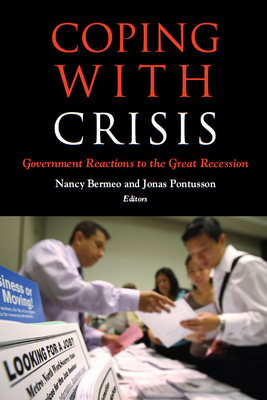 Coping with Crisis: Government Reactions to the Great Recession (Paperback)


Special Order—Subject to Availability
The financial crisis that erupted on Wall Street in 2008 quickly cascaded throughout much of the advanced industrial world. Facing the specter of another Great Depression, policymakers across the globe responded in sharply different ways to avert an economic collapse. Why did the response to the crisis—and its impact on individual countries—vary so greatly among interdependent economies? How did political factors like public opinion and domestic interest groups shape policymaking in this moment of economic distress? Coping with Crisis offers a rigorous analysis of the choices societies made as a devastating global economic crisis unfolded. With an ambitiously broad range of inquiry, Coping with Crisis examines the interaction between international and domestic politics to shed new light on the inner workings of democratic politics. The volume opens with an engaging overview of the global crisis and the role played by international bodies like the G-20 and the WTO. In his survey of international initiatives in response to the recession, Eric Helleiner emphasizes the limits of multilateral crisis management, finding that domestic pressures were more important in reorienting fiscal policy. He also argues that unilateral decisions by national governments to hold large dollar reserves played the key role in preventing a dollar crisis, which would have considerably worsened the downturn. David R. Cameron discusses the fiscal responses of the European Union and its member states. He suggests that a profound coordination problem involving fiscal and economic policy impeded the E.U.'s ability to respond in a timely and effective manner. The volume also features several case studies and country comparisons. Nolan McCarty assesses the performance of the American political system during the crisis. He argues that the downturn did little to dampen elite polarization in the U.S.; divisions within the Democratic Party—as well as the influence of the financial sector—narrowed the range of policy options available to fight the crisis. Ben W. Ansell examines how fluctuations in housing prices in 30 developed countries affected the policy preferences of both citizens and political parties. His evidence shows that as housing prices increased, homeowners expressed preferences for both lower taxes and a smaller safety net. As more citizens supplement their day-to-day income with assets like stocks and housing, Ansell's research reveals a potentially significant trend in the formation of public opinion. Five years on, the prospects for a prolonged slump in economic activity remain high, and the policy choices going forward are contentious. But the policy changes made between 2007 and 2010 will likely constrain any new initiatives in the future. Coping with Crisis offers unmatched analysis of the decisions made in the developed world during this critical period. It is an essential read for scholars of comparative politics and anyone interested in a comprehensive account of the new international politics of austerity.
NANCY BERMEO is the Nuffield Professor of comparative politics at Oxford University, Oxford, U.K. JONAS PONTUSSON is professor of comparative politics at the University of Geneva, Switzerland.