The Other Oregon: People, Environment, and History East of the Cascades (Paperback) 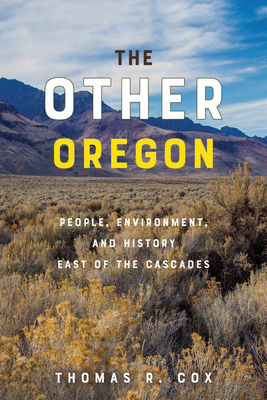 The Other Oregon: People, Environment, and History East of the Cascades (Paperback)


Special Order—Subject to Availability
The Other Oregon: People, Environment, and History East of the Cascades is a multidisciplinary work that ranges widely through a diverse and often under-appreciated land, drawing on the fields of environmental history, cultural and physical geography, and natural resource management to tell a comprehensive and compelling story.

With a staggering variety of landscapes, from high desert to alpine peaks, Oregon east of the Cascades encompasses seventeen counties and two time zones. Although this vast region defies generalization, its history is distinct from the rest of Oregon. The interrelationship between its people and the land has always been central, but that relationship has evolved and changed over time. Regional economies that were once largely exploitive and dedicated to commodity exports have slowly moved toward the husbanding of resources and to broader and deeper appreciations.

Historian Thomas Cox reveals the complexity of interactions between the people of Eastern Oregon, the land, natural resources, and one another, demonstrating how the region’s history speaks to larger American issues. The 2016 occupation of the Malheur National Wildlife Refuge, covered in detail within these pages, further reveals the relevance of Eastern Oregon to the larger world.

Written in clear and engaging prose and informed by extensive research, The Other Oregon will be a valuable resource for anyone interested in the environment, social change, and the relationships among the diverse people who make up Oregon society east of the Cascades. It will appeal to area residents and visitors, students of the American West, environmental historians, biologists, land managers, and anyone with an abiding interest in the region.
Thomas R. Cox grew up in Eastern Oregon where he fought forest fires, served as a sawmill worker, and coached high school football. He earned his bachelor’s degree from Oregon State University and his PhD in history from the University of Oregon. He spent most of his academic career at San Diego State University. Cox has published widely in the fields of environmental, social, and economic history. He was a pioneer member of the American Society of Environmental History, a past-president of the Forest History Society, and a Fulbright Professor in Japan. He lives outside of McCammon, Idaho.