Reporting the Oregon Story: How Activists and Visionaries Transformed a State (Paperback) 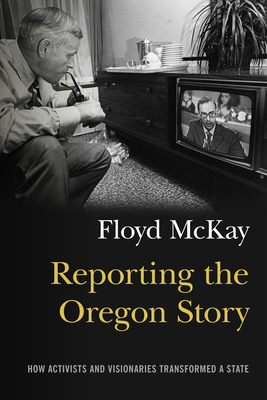 Reporting the Oregon Story: How Activists and Visionaries Transformed a State (Paperback)


Special Order—Subject to Availability
Oregon entered a new era in 1964 with the election of Tom McCall as Secretary of State and Bob Straub as State Treasurer.  Their political rivalry formed the backdrop for two of Oregon’s most transformative decades, as they successively fought for, lost, and won the governorship. Veteran Oregon journalist Floyd McKay had a front-row seat.

As a political reporter for The Oregon Statesman in Salem, and then as news analyst for KGW-TV in Portland, McKay was known for asking tough questions and pulling no punches. His reporting and commentaries ranged from analysis of the “Tom and Bob” rivalry, to the Vietnam War’s impact on Senators Wayne Morse and Mark Hatfield and the emergence of a new generation of Portland activists in the 1970s.

McKay and his colleagues were on the beaches as Oregon crafted its landmark Beach Bill, ensuring the protection of beaches for public use. They watched as activists turned back efforts to build a highway on the sand at Pacific City. Pitched battles over Oregon’s Bottle Bill, and the panic-inducing excitement of “Vortex”—the nation’s only state-sponsored rock festival—characterized the period. Covering the period from 1964-1986, McKay remembers the action, the players and the consequences, in this compelling and personal account.

As major actors fade from the scene and new leaders emerge, McKay casts a backwards glance at enduring Oregon legends. Half a century later, amid today’s cynicism and disillusionment with media, politics, and politicians, Reporting the Oregon Story serves as a timely reminder that charged politics and bitter rivalries can also come hand-in-hand with lasting social progress.

Reporting the Oregon Story will be relished by those who lived the history, and it will serve as a worthy introduction to Oregonians young and old who want a first-hand account of Oregon’s mid- twentieth-century political history and legislative legacy.
Floyd McKay was a leading journalist at The Oregon Statesman in Salem, and as news analyst at KGW-TV in Portland. For his work as a reporter and producer of documentaries, he won the DuPont-Columbia Broadcast Award, the “Pulitzer Prize of Broadcasting.” He holds a PhD in Media History from the University of Washington. He was a Nieman Fellow in journalism at Harvard University and taught journalism at Western Washington University. McKay lives in Bellingham, Washington.
Floyd McKay's Reporting the Oregon Story is an historic gem.  The knowledge McKay brings as a journalist, reporter and commentator adds both color and depth to the amazing twenty year span where Tom McCall and Bob Straub played leading roles. Floyd's love of Oregon blends flawlessly with his commitment to tell this story with accuracy and heart." --Governor Barbara Roberts, 1991-1995

"Floyd McKay is a sure-footed guide to Oregon’s unique political culture, which blossomed in the boom years of the 1960s and 1970s.   In this memoir of his years as a newspaper reporter and TV commentator, McKay gives us up-close assessments of Tom McCall, Bob Straub, Mark Hatfield and other key leaders who shaped Oregon and helped lead the drive to protect our beaches and open spaces.  If you want to understand the roots of Portlandia or how a governor could spur population growth by urging people to visit but not stay, Reporting the Oregon Story is an excellent place to start.” – Jeff Mapes, Senior Political Reporter, OPB News


“Floyd McKay’s account of his experiences covering Oregon politics from 1964-1986 is a clear window into the personalities, issues, and culture of Oregon during a tumultuous and very productive era in our state’s history. Few observers of Oregon politics from this period have had the kind of access to the major players driving the narrative, and few are capable of the analytical insights that McKay offers here.  We are fortunate that he has chosen to capture what he remembers – and he remembers a lot.” Charles K. Johnson, author of Standing at the Water's Edge:  Bob Straub's Battle for the Soul of Oregon

"Reporting the Oregon Story is not a political history, but it is a revealing documentary of key people and events that fills a place between journalistic first takes and analytical history. The best sequences in McKay's selective remembrance of his very successful career - he was awarded the prestigious duPont-Columbia broadcast award in 1978 while at KGW-TV - are his cogent analyses of the strengths and weaknesses of the main political players, from McCall to Neil Goldschmidt. His focus is on how the successful politicians embraced the energy and ideas of Oregon's activists and connected directly with the populace."
- William L. Lang, Pacific Northwest Quarterly