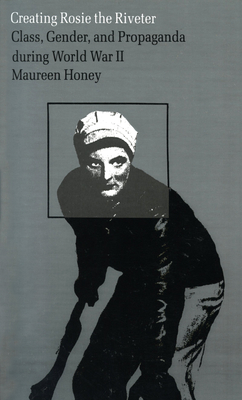 
Special Order—Subject to Availability
Creating Rosie the Riveter examines advertisements and fiction published in the Saturday Evening Post and True Story in order to show how propaganda was used to encourage women to enter the work force.
Maureen Honey is professor of English at the University of Nebraska-Lincoln.
"An illuminating study of WWII propaganda directed at women and labor force participation. . . . Excellent reading for courses in women's studies, communications, and culture."—Choice

"'How did the strong figure of Rosie the Riveter become transformed into the naive, dependent, childlike, self-abnegating model of femininity is the late forties and 1950s?' Honey's analysis of fiction and advertising in two popular magazines [True Story and Saturday Evening Post] of the period follows the shifting image of women produced in response to advice and actual story ideas from government propaganda agencies, e.g., the Office of War Information. By untangling conflicting themes in these and earlier images, she moves beyond the conspiracy theory often implied in discussions of the 'feminine mystique.' This scholarly study is decidedly readable and concise."—Library Journal

"Honey's fine study of wartime images of women underscores the importance of systematic research. In addition, her book demonstrates the value of scholarly sensitivity to issues of class as well as gender. The differences Honey finds are striking, her conclusions sobering."—American Historical Review

"Honey has produced a provocative history. Creating Rosie the Riveter makes one think differently about how advertising and the division of labor can affect the image of women. Rosie the Riveter was created in a short time in a moment of need, but she was dismissed just as quickly, sent off to have babies and find meaning in the world where 'father knows best.' This shift was caused not only by the mass media, but also by the images already present in the American tradition. The strong pioneer woman and the keeper of the hearth have been around for a long time."—Business History Review

"Honey's well-researched and well-written volume helps to demonstrate that continuity with the past and future, not change, was the dominant theme for women in the 1940s."—D'Ann Campbell, Minerva