Audrey of the Mountains (Paperback) 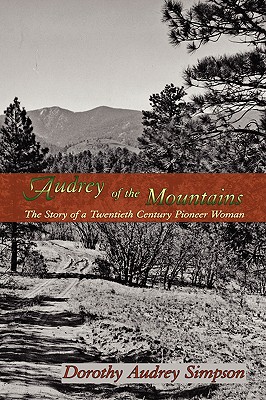 Audrey of the Mountains (Paperback)


Not On Our Shelves—Ships in 1-5 Days
Audrey Clements Simpson was one of the first female journalists in New Mexico and was known for her informative, influential and inspiring writing. Born in Lincoln, Nebraska on November 11, 1912, she was brought up in a family where her father was a cowboy and her mother a teacher. When the Clements family moved to New Mexico, Audrey's mother roped a wild cow every day to provide milk and rode horseback to the school house. Audrey's father taught his two-year-old daughter to ride when he wasn't out on the range herding cattle. Audrey later worked her way through school, then married Clyde Simpson and they had two children. During a separation, Audrey moved back to her mountain ranch near Las Vegas and had to deal with the elements and the wild life while supplementing her income by free lance writing for such publications as "The Denver Post," "New Mexico Magazine" and "True Treasure." Audrey later worked as a reporter/editor at the "Las Vegas Daily Optic." After she was reunited with her husband, they had a third daughter. Audrey interviewed and knew, among others, some of the last of Teddy Roosevelt's Rough Riders; actors Rex Allen and Fred A. Stone; and writers S. Omar Barker and Claire Turlay Newberry. The events of Audrey's years from 1912 to 1997 are rich in the pathos of life in a world that few remember. Dorothy Audrey Simpson, Ed.D., a native of Las Vegas, New Mexico, is a professor emeritus from New Mexico Highlands University in Las Vegas. Her first book, "Hovels, Haciendas and House Calls: The Life of Carl H. Gellenthien, M.D.," was published by Sunstone Press in 1986. That book, written under the name Dorothy Simpson Beimer, was dedicated to her mother, Audrey Simpson. With a B.A. from New Mexico Highlands University, an M.S. from the University of Utah, and an Ed.D. from the University of New Mexico, Dr. Simpson taught over thirty years while writing various articles for publications such as "True West," "Old West," "Good Old Days," and "Dog Fancy." She has also published under the names Dorothy Simpson Croxton and D.A. Simpson. She has two daughters, Laura Mitchell and Rose Shore, and three grandchildren: Caitlin Nelson, Wade Nelson, and Jessica Mitchell.