The Banyan Deer: A Parable of Courage and Compassion (Hardcover) 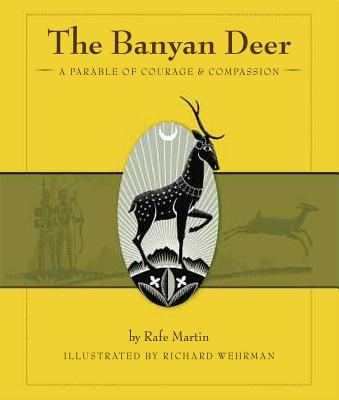 The Banyan Deer: A Parable of Courage and Compassion (Hardcover)


Backordered
This inspiring tale reminds us that no one can be truly at peace unless all beings have a chance for peace, freedom, and happiness. The Banyan Deer is a wonderful, heart-warming gift for anyone who loves a great story. This beautiful hardcover edition will delight both adults and children alike.
Rafe Martin is the author of over twenty award-winning books for adults, children, and young adults. He is also a lay Zen teacher in the Harada-Yasutani koan line and founding teacher of Endless Path Zendo, Rochester, NY. A personal disciple of Roshi Philip Kapleau (Three Pillars of Zen) and the editor of Roshi Kapleau’s final two books, he later trained with Robert Aitken Roshi, completing the Diamond Sangha koan curriculum and receiving inka (authorization to teach) from Danan Henry Roshi, a Kapleau lineage teacher and a Diamond Sangha (Aitken line) Dharma Master. Rafe’s books have been cited in Time, Newsweek, The New York Times, and USA Today. He is the recipient of the Empire State Award for his body of work as well as multiple ALA Notable Book Awards and Storytelling World Awards. He has spoken at such events and places as the Joseph Campbell Foundation Festival of Myth and Story, The American Museum of Natural History, The Freer Gallery/Smithsonian, the National Storytelling Festival and International Storytelling Institute, the American Library Association Annual Conference, The American Booksellers Annual Conference, many Zen and Dharma Centers around the country, and numerous literary and storytelling festivals. His writings have appeared in Buddhadharma, Tricycle, Lion’s Roar, The Sun, Zen Bow, Inquiring Mind, Parabola, and other journals of note.

Award-winning illustrator Richard Wehrman was born in St. Louis and attended the Washington University school of fine arts. His paintings have been exhibited at the Saint Louis Art Museum, the St. Louis Artists' Guild, and Washington University. He was chosen as Rochester's Communicator of the Year for illustration and has received a gold medal from the Society of Illustrators. Richard serves on the board of directors of the Heartwork Institute and lives in Upstate New York.
"The Banyan Deer shows that the lives of all living beings are equally important."
— His Holiness the Seventeenth Karmapa, Ogyen Trinley Dorje

"A sweet and sensitive story of courage, sacrifice and kindness."
— Dan Millman, author of The Way of the Peaceful Warrior

"The narrative of a deer king who lays his life on the line not only for his own people but for all creatures, this story is a tale for all ages, with many subtleties layered beneath its surface. Though this is originally a Buddhist story, the text does well regardless of belief system (or lack thereof). The Banyan Deer is a welcome addition to any collection."
— Elephant Journal

"The Banyan Deer by Rafe Martin, a gifted storyteller and award-winning author, is the ultimate story of courage and compassion… In less capable hands, this story is instructive but hardly riveting, but in Martin's it's a page-turner."
— Tynette Deveaux, "Good Reads for Little Buddhas," Shambhala Sun