Social Warming: How Social Media Polarises Us All (Paperback) 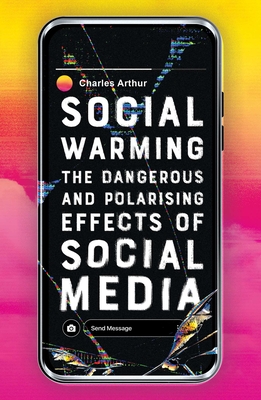 Social Warming: How Social Media Polarises Us All (Paperback)

‘Witty, rigorous, and as urgent as a fire alarm’ Dorian Lynskey

Nobody meant for this to happen.

Twitter didn’t want to be used to harass women.

But with billions of users, these platforms need only tweak their algorithms to generate more ‘engagement’. In so doing, they bring unrest to previously settled communities and erode our relationships.

Social warming has happened gradually – as a by-product of our preposterously convenient digital existence. But the gradual deterioration of our attitudes and behaviour on- and offline – this vicious cycle of anger and outrage – is real. And it can be corrected. Here’s how.
Charles Arthur is a journalist, author and speaker, writing on science and technology for over thirty years. He was technology editor of the Guardian from 2005–2014, and afterwards carried out research into social division at Cambridge University. He is the author of two specialist books, Digital Wars and Cyber Wars.
‘Social media was meant to bring us closer together. Instead, it tore us apart. Charles Arthur has written the definitive account of how arrogance and greed got us into this mess, and how we might get out of it. Witty, rigorous, and as urgent as a fire alarm.’
— Dorian Lynskey

‘A guide to how the apps we use every day are hacking our politics, our society, and even who we are. It reads like science fiction, except he’s describing our world – right now.’
— Ian Dunt

‘A compelling account of how a handful of social media platforms came to dominate society and how to minimise the damage they cause, because “We can’t uninvent them”.’
— Mirror

‘The rapidity with which social media has come to dominate communications in this country – in less than two decades – has been breathtaking… Arthur helps bring the whole complex issue into greater focus here. He looks at the origins of social media, describing its early promise, and then follows the dangerous paths the phenomenon has been taking in recent years.’
— Booklist

‘Fascinating… As “connected” as we may feel on social media, Social Warming thoroughly shows how detached we’ve all become not just online but in real life too.’
— Porchlight