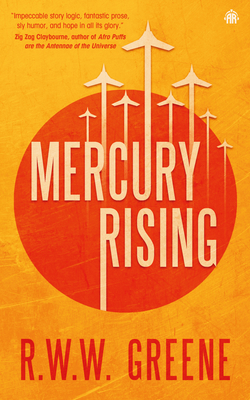 
On Our Shelves Now at:
Alternative history with aliens, an immortal misanthrope and SF tropes aplenty

The year is 1975 – Robert Oppenheimer has invented the Atomic Engine, the first human has walked on the moon, and Jet Carson and the Eagle Seven have sacrificed their lives to stop alien invaders.
Brooklyn, however, just wants to keep his head down, pay his mother’s rent, earn a little scratch of his own, and maybe get laid sometime. Simple pleasures! But life is about to get real complicated when a killer with a baseball bat and a mysterious box of 8-track tapes sets him up for murder.

So, his choices are limited – rot away in prison or sign up to defend the planet from the assholes who dropped a meteorite on Cleveland. Brooklyn crosses his fingers and picks the Earth Orbital Forces, believing that after a few years in the trenches – assuming he survives – he can get his life back. Unfortunately, the universe has other plans.

Brooklyn is launched into a quest to save humanity, find his true family, and grow as a person – while simultaneously coping with high-stakes space battles, mystery science experiments and the realisation that the true enemies perhaps aren’t the tentacled monsters on the recruitment poster… Or are they?

File Under: Science Fiction [ Little Green Men | Injection | Below the Crust | The Truth is out There ]
R.W.W. Greene is based in New Hampshire, USA. He is a frequent panellist at the Boskone Science Fiction & Fantasy Convention in Boston, and his work has seen daylight in Stupefying Stories, Daily Science Fiction, New Myths, and Jersey Devil Press. Greene keeps bees, collects typewriters, and lives with his writer/artist spouse Brenda and two cats. He is a member of the Science Fiction & Fantasy Writers Association of America.
"Greene remixes sci-fi conventions into a wild, satisfying adventure in a nearly picaresque vein…Readers willing to roll with the punches will delight in following Greene’s winding path."
– Publishers Weekly

"Greene's world is immersive, compelling, and fun. Brooklyn's saga takes us from a dank New York City jail cell to bone-dry Texas, the rim of a still-smoking crater, the Arctic circle, a Vegas-like city on the moon, and beyond. And, like Brooklyn, I could only hang on for dear life and enjoy the ride. As with all good alternate history, it entertains while shining a light on issues that bedevil this world, and makes you think about the missed opportunities in our own timeline.”
– B.L. Blanchard, author of The Peacekeeper

"With a deft weaving of rock ‘n roll, denim suits, AMC Pacers and nuclear-powered spaceships, Greene effortlessly recreates a 1970s America that could have been. This thoroughly plausible alternate history in which asteroid-slinging aliens threaten a spacefaring human race is narrated by Greene’s unlikely hero, Brooklyn Lamontagne. Seemingly a brash young ne-er-do well, Brooklyn is redeemed by his love for his mother and his loyalty to his friends and you can’t help but root for him as he navigates a rocky path from the cold streets of NYC to the moon and beyond. As the stakes intensify and the mystery around earth’s implacable enemy deepens, the story becomes a ride as fast as an Oppenheimer-powered rocket and you won’t want it to stop. Can’t wait to see what comes next!"
– Sarah J. Daley, author of Obsidian

"The action in Mercury Rising is compelling from the first chapter. Greene’s skill at creating an alternate space-faring America in the mid-1970’s is studded with the perfect amount of pop culture references, and his many-layered Everyman, Brooklyn Lamontagne, feels like a long-lost best friend. All this combines to lock you in for a thrilling story that’s impossible to put down."
– Ginger Smith, author of The Rush's Edge

"Everything I've come to love about Greene: impeccable story logic, fantastic prose, sly humor, and hope in all its glory."
– Zig Zag Claybourne,  author of Afro Puffs are the Antennae of the Universe

"Mercury Rising charmed and fascinated me. Greene has taken an absolutely wild premise and somehow made it fit like a puzzle piece into our own history and knowledge of the greater universe. It is unexpected and clever, heartfelt and funny, with big, conceptual penny-drop moments that hit the reader as hard as they hit the novel's weary protagonist, Brooklyn Lamontagne."
– Chris Panatier, author of Stringers and The Phlebotomist

"Surprising, engaging, and with plenty of smart nods to society’s bullshit, Mercury Rising is a slice of alternative history that reads like science-fiction Stephen King. A joy."
– Dan Hanks, author of Swashbucklers

"A tense and moody ride-along on a merchant starship with a corporate family in a far future where being an honest trader is a liability and marriage is about adding a needed skill to the crew, willing or no.  But there is always light to be found in the darkness and great discoveries lurk in unexpected places.”
- Marjorie B. Kellogg, author of GLIMMER