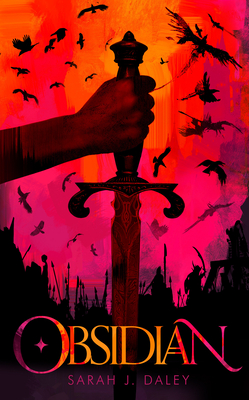 
Not On Our Shelves—Ships in 1-5 Days
Shade Nox is the only witch in a land of wizards – a fiend, a rogue, a wanted criminal.

Defying those who think her an abomination, Shade wears her tattoos openly and carries obsidian blades at her hips. For years, she has protected the outcast clans who wander the blighted Wastes, but the land is growing more unstable and her blades are no longer enough.

To save her people, Shade vows to raise a Veil of protection – a feat not accomplished in over a hundred years. But the magical Veils are said to belong to the Brotherhood church; if she succeeds in raising one, it will expose their lies. They swear to see her obliterated first.

Treading a dangerous path where allies can be as deceitful as enemies, and where demons lurk in the shadows, Shade chases a vision which could lead to her people’s salvation… or her own destruction.

File Under: Fantasy [ Tattoos At Dawn | Underestimated Women | Old Jealousies | The End of Whose World ]
Sarah J. Daley is a former chef who lives and writes in the Chicago Metropolitan area with her husband and teenaged son. She earned a degree in Landscape Architecture from the University of Illinois at Champaign-Urbana. Though she still enjoys the heat and chaos of a professional kitchen, she is now writing full-time. She enjoys traveling, creating costumes for comic con, riding the occasional horse, and streaming old sitcoms for background noise.
"Readers looking for a Dune read-alike will find this epic fantasy a treat with its scenario of oppressive government and ecological catastrophe being fought by heroic desert dwellers with mysterious powers and a complete disregard for the powers-that-be. They’ll be left hoping this fantastic adventure has a sequel."
– Library Journal, debut of the month

"Electric character relationships and masterful worldbuilding—encompassing a spectacular magic system, mystical urban legend, and profound mystery—are sure to impress. Those looking for fantasy with a dystopian flair should snap this up."
- Publisher's Weekly

"Sarah J Daley’s deftly-crafted debut, Obsidian, introduces us to the island nation of Malavita, protected by the magically-erected “Veils”, separating its population from the demonic blight of the barren wastes. Malavita is ruled from afar by an Empire keen to exploit its rich natural resources, and by the corrupt Brotherhood of blood magicians. Into this complex political landscape the Empire sends Captain Raiden Mad, to explore the possibility of erecting a new Veil with the help of a local prince and an outlaw witch. Daley weaves a powerful tale of friendship, power and sacrifice, with a rich cast of characters led by loyalty and ambition. A sure crowd-pleaser."
– Gabriela Houston, author of The Second Bell and The Wind Child

“Full of fun and fresh twists on the usual fantasy fare, with compelling heroes, an engaging plot, sizzling tension, and smart dialogue, Obsidian is a joy.“
– Dan Hanks, author of Swashbucklers

"A brash and powerful young bloodwizard goes up against the mafia-like Brotherhood to create a magically protected haven in this entertaining if uneven debut fantasy....This will satisfy many readers looking for fast-paced fantasy and kickass protagonists in the vein of Empire of Sand (2018) by Tasha Suri and The Assassin's Curse (2013) by Cassandra Rose Clarke."
– Booklist