Among the Almond Trees: A Palestinian Memoir (The Arab List) (Hardcover) 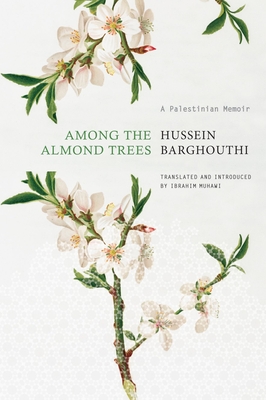 Among the Almond Trees: A Palestinian Memoir (The Arab List) (Hardcover)


In Stock—Click for Locations
A poetically written and bitterly sweet memoir about nature, death, life in Palestine, and the universal concept of home.

Palestinian writer Hussein Barghouthi was in his late forties when he was diagnosed with lymphoma. He had feared it was HIV, so when the cancer diagnosis was confirmed, he left the hospital feeling a bitter joy because his wife and son would be spared. The bittersweetness of this reaction characterizes the alternating moods of narration and reflection that distinguish this meditative memoir, Among the Almond Trees.

Barghouthi’s way of dealing with finality is to return to memories of childhood in the village of his birth in central Palestine, where the house in which he grew up is surrounded by almond and fig orchards. He takes many healing walks in the moonlit shadows of the trees, where he observes curious foxes, dancing gazelles, a badger with an unearthly cry, a weasel, and a wild boar with its young—a return not only to the house but to nature itself. The author decides to build a house where he would live with his wife and son, in whom he sees a renewal of life. The realization of his impending death also urges him to vocalize this experience, and he relates the progress of the disease at infrequent intervals. And, ultimately, he details the imaginative possibility of a return to life—to the earth, where he would be buried among the almond trees.
Hussein Barghouthi (1954–2002) was a Palestinian poet, writer, essayist, critic, lyricist, playwright, and philosopher. Born in Palestine, he earned his MA and PhD in the US before going on to teach at Birzeit University and Al-Quds University. His best-known work, The Blue Light, is forthcoming in English translation in 2022 from Seagull Books.

Born in Palestine, Ibrahim Muhawi has taught at universities in North America, the Middle East, and Europe, before devoting himself to translating Palestinian literature and folklore in retirement.

Born in Palestine, Ibrahim Muhawi has taught at universities in North America, the Middle East, and Europe, before devoting himself to translating Palestinian literature and folklore in retirement.
"Among the Almond Trees is a memoir transformed into a powerful testament; it glimpses beyond the horizon line of life and death into a place of art, memory, and the poetics of the ordinary. . . . A spiritual memoir that’s concerned with the mutability and impenetrability of language and life, Among the Almond Trees creates a taxonomy of presence and absence that makes continuity from seeming opposites, one that’s filled with nuance and largesse for both the Palestinian people and the nearer pain of Barghouthi’s own illness and looming death."
— Foreword (Starred Review)

"By unearthing the fairytales that his mother told him in his youth and adding his own mythologization of the countryside, Barghouthi challenges the settler colonial imaginary of Palestine... The memoir's political power lies in its celebration of and contribution to the poetics of the Palestinian countryside... Ibrahim Muhawi's masterful translation of this highly complex memoir is a much-needed step in the further dissemination of Arabic autobiographical writing at the global stage."
— Washington Report on Middle Eastern Affairs