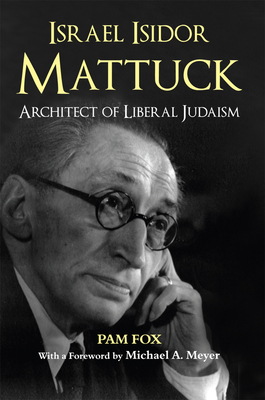 By Pam Fox, Michael A. Meyer (Foreword by)


Special Order—Subject to Availability
(This book cannot be returned.)
This book shows how Israel Mattuck was probably the most influential figure in the development of the Liberal Jewish Synagogue in the UK and the wider Liberal Jewish movement through his involvement with the World Union for Progressive Judaism, which he chaired from its foundation in 1926 until his death in 1954. His authority was partly the result of his personality and intelligence, but also his thorough Jewish education, which in England only Israel Abrahams could equal, together with his first-hand exposure to the American Reform Movement. At the time of his death, Israel Mattuck was hailed as a 'Jewish Archbishop of Canterbury' and the magnitude of his achievements is undeniable: he led the LJS and the Liberal Jewish movement through two world wars, he produced prayer books that provided the liturgy for the Liberal Jewish movement for over 40 years, and he was one of the prime instigators in setting up the London Society of Jews and Christians, which he co-chaired for many years and which provided the model for the foundation of the Council of Christians and Jews in 1942. *** "Pam Fox has produced a well-documented and fluid study of Israel Isidor Mattuck's remarkable life and career. It is a long overdue full-scale biographical analysis of England's leading champion of liberal Judaism during the first half of the 20th century. Fox sheds new light on Mattuck rabbinate and reminds us that this largely forgotten leader of London's Liberal Jewish Synagogue ultimately became Britain's leading ideologue of Liberal Judaism as well as a master-builder of its organizational infrastructure. This fine study will appeal to all who are interested the dynamic history of Liberal Judaism in Great Britain and in the United States." -- Prof. Gary P. Zola, American Jewish Experience at Hebrew Union Coll., Cincinnati, Ohio *** "As the book amply shows, Rabbi Mattuck was a major participant in British life and world Jewry. It is regrettable that he is so little remembered. This volume is a readable, comprehensive overview of his life, with three summary chapters and extensive notes. As such, it is appropriate for larger libraries covering 20th century world Judaism." -- AJL Reviews, November/December 2016 [Subject: Biography, History, Jewish Studies, Religious Studies]