The Survivors: The Story of the Belsen Remnant (Hardcover) 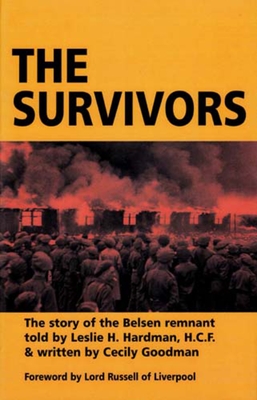 The Survivors: The Story of the Belsen Remnant (Hardcover)


Special Order—Subject to Availability
Leslie H. Hardman, a Jewish chaplain, entered Belsen camp two days after its liberation by the British Army. This book tells the story of what he found there, and what he did. The horror which first confronts him is overwhelming, and something other than himself makes him stay and face it. In the beginning he feels he is making no inroads into the task he has set himself, that he is a pigmy grappling with a mountain. But with courage and patience he brings faith, comfort and help to the stricken survivors. In his mission he meets some remarkable men and women: Marta the woman doctor, Yankel the strong man, Eva whose love is oddly deflected, Joseph who rises to astonishing heights, and many others. He himself is enmeshed in the life of liberated Belsen, experiencing hope, despair, intolerance, inspiration. This book is an authentic record, written with compassionate understanding. The account of the rebirth of the almost dehumanised survivors is an inspiring, rather than a harrowing narrative. In the simplicity and sincerity of its writing, it tells a moving and vivid story of a crime which has shocked the world, but which should be read and remembered.