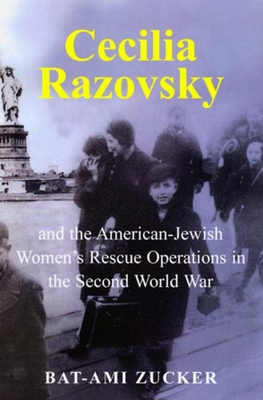 
Special Order—Subject to Availability
This book highlights Jewish women's activities in the 1930s and 1940s as they were reflected in one outstanding woman - Cecilia Razovsky. Her wide range of activities spanning more than fifty years and her outstanding devotion to assisting refugees and refugee children reveal her as a woman who dedicated her personal life and her professional skills to the Jewish people. Without doubt, she stands as a representative for the thousands of anonymous American-Jewish women, who made a difference. The book is based on primary sources. The Jewish-American campaign for the European refugees before and during the Second World War is commonly perceived as having been spearheaded by male leaders. Stephen Wise is the most familiar and outstanding figure among them; other frequently mentioned personalities include Cyrus Adler, Herbert Lehman, Judge Joseph Proskauer, Judge Julius Mack, and Morris Troper. Together, these leaders have been credited for their efforts to persuade the Roosevelt administration to open US doors to Jewish refugees. But although women, too, were deeply involved in Jewish community welfare projects, they were seldom recognized for their activities, and certainly were not accorded the attention they deserve in contemporary historiography. In the tragic years before, during, and after the Second World War, it was the vital role played by ordinary groups of Jewish women far from the spotlight, and their mighty efforts to establish and maintain a firm organizational foundation, that enabled the refugee workers to execute their goals.