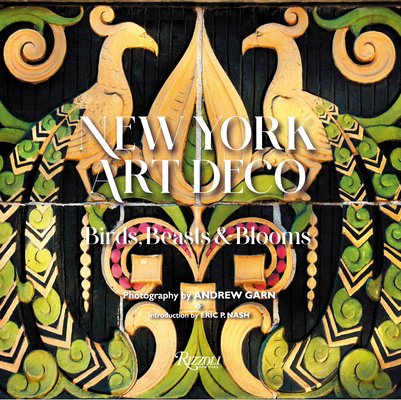 By Eric P. Nash (Introduction by), Andrew Garn (Photographs by)


On Our Shelves Now at:
The definitive book on New York Deco, from the smallest of details to the grandest of buildings.

New York City, arguably the world’s Art Deco capital, is well known for its striking and still iconic towers that were early expressions of the style writ large—most famously the Empire State and Chrysler buildings, both of which still speak so eloquently of the future and the machine age that continues to move us all forward. Art Deco is drawn in steel, in tile, in brass, in bronze, and in stone upon great buildings and small—and in the details, as so engagingly shown here. The reader is brought, for example, into the extraordinary Fred F. French Building at 551 Fifth Avenue in Manhattan, a treasure house of the form whose ornate lobby is a wonder of sparkling seduction in all directions: racing above is a fan palm and fleur de lis–decorated architrave, and golden Assyrian equestrian archers on a field of onyx take aim while stunning chandeliers set with crystal feathers and bronze shoot out their own thin arrows of illumination. Beyond the famous, we are invited to consider little-seen stunners beside the Grand Concourse in the Bronx or upon the face of an apartment house in Brooklyn Heights. Featuring both the legendary and the little known, on display here, through all-new photography, is Art Deco New York as never seen before.

Andrew Garn is a Fulbright-winning photographer and author of New York by Neighborhood. Eric P. Nash is the author of SoHo New York and was a researcher for the New York Times for twenty-five years, where he wrote more than 100 articles
"New York Art Deco makes the case for the city’s status as the world’s capital for design’s most deliciously flamboyant period, with examples ranging from Manhattan’s Empire State and Chrysler buildings to lesser known treasures in Brooklyn and the Bronx." —ELLE DECOR

"Rizzoli’s new book New York Art Deco presents deco flora and fauna both familiar and obscure, from the winged urns of the Chrysler Building to the decorative ironwork antelopes that sit atop the door to 7 Gracie Square" —NEW CRITERION

"Packed with closeup views of dazzling details by photographer Andrew Garn, this new book allows an intimate look at 59 buildings in the city." —BROENSTONER