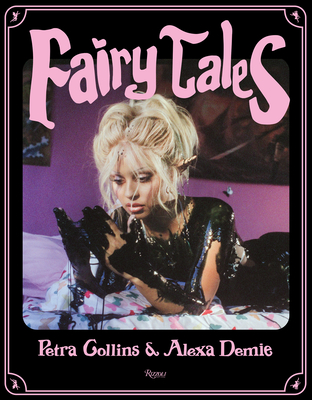 By Petra Collins (Photographs by), Alexa Demie (Contributions by)

Each of the nine tales are set in unique spaces, ranging from suburban homes and parking lots to fantastical sets. Petra and Alexa’s chapters of elves, mermaids, sirens, water sprites, fallen angels, fairies, witches, and banshees blend their own stories with retold fairy tales. The photos combine elements of camp, prosthetics, and shibari in a surreal update to the imagery of the Brothers Grimm, Hans Christian Anderson, Charles Perrault, and others.
Petra Collins is a multi-talented artist and director whose photography set the stylistic tone for much of the 2010s. Shooting since the age of 15, her work is fueled by self-discovery and a contemporary femininity which explore the complex intersection of life as a young woman online and off. Collins weaves through the worlds of art, fashion, film, and music. She is working on her first feature film, set to shoot in 2021.

Alexa Demie is an actor, musician and multi-hyphenate talent who currently stars as ‘Maddy’ in HBO’s EUPHORIA. She has starred in acclaimed A24 films and had success in creative direction and design projects. Alexa is currently working on her first EP, developing and producing film and TV, and engaged in social impact work focused on equality and representation, especially for the Latinx community and the next generation of youth.
"Once upon a time, there was a subversive fashion photographer who released her book this week…oh, wait! That’s not an actual fairy tale—but Petra Collins’ visual tome certainly fits the bill. Created in collaboration with Euphoria star and muse Alexa Demie, Collins has just dropped “Fairy Tales,” her latest book in the form of nine erotic short stories based on works by the Brothers Grimm, Hans Christian Anderson, and more. Both women collaborated on the text and the visuals, which star Demie as various elves, mermaids, fairies, and other make-believe creatures in surrealist sets that blend reality and fantasy." —DAILY FRONT ROW

"[Fairy Tales is] a collaboration with the photographer Petra Collins -- a body of work that reimagines the female creatures who inhabit folk- and fairy-tales, who are often cast as one-dimensional monsters or temptresses. Their recent photo book "Fairy Tales" features Demie as nine different personas, including a faerie, siren, banshee and water sprite, as well as Hungarian legends like Tűz Anya (meaning'fire mother') that Collins grew up with. It explores the femininity and sexuality of mythological beings, but in the context of very human spaces, such as teenage bedrooms, medical facilities, parking lots and exotic dancing clubs." —CNN

"Newest edition to our coffee table book collection. We are obsessed." —BELLETRIST