Home: A Celebration: Notable Voices Reflect on the Meaning of Home (Hardcover) 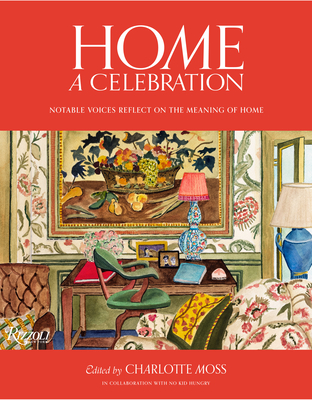 Home: A Celebration: Notable Voices Reflect on the Meaning of Home (Hardcover)


Backordered
Celebrated artists, designers, photographers, writers, actors, and activists offer personal reflections on the essence of home in this inspirational book to benefit No Kid Hungry.


Filled with personal insight, humor, creativity, joy, and poignancy, Home: A Celebration is a lyrical ode to sanctuary and a thoughtful and inspirational book to peruse again and again. Through the lenses of their crafts and passions, each illustrious contributor presents an offering—either a personal text or work of art—on what home means to them. Historian Jon Meacham discusses books as the emotional infrastructure of the houses in his life. Photographer Oberto Gili documents the glorious garden at his property in northwest Italy. Chef Alice Waters proffers a recipe from her home garden. Interior designers—including Nina Campbell, Steven Gambrel, and Kelly Wearstler—share aspects of their profession that define home to them. Other notable pieces are from Joan Juliet Buck, Julian Fellowes, John Grisham, Jill Kargman, Joyce Carol Oates, and Gloria Steinem.

Charlotte Moss’s inspiration for this project is Edith Wharton’s The Book of the Homeless (1916), a fundraising effort that aided refugees and children during the First World War. For this book, a portion of the profits are benefiting the organization No Kid Hungry, which works to feed more than 11 million children in the United States who live in food-insecure homes.

"Edited by Charlotte Moss, this collection of reflections on home from renowned writers, designers, actors, artists, photographers and activists is sure to offer fresh appreciation for our own dwellings that have meant more than ever to us in the last year. Readers can expect essays from Alice Waters, Stephen Gambrel, Julian Fellowes, Gloria Steinem, among many other inspirations in their respective fields. Moss was inspired by Edith Wharton's The Book of the Homeless, which served as a fundraising effort for children and refugees during WWI. This book will benefit No Kid Hungry, a nonprofit organization that supports the 11 million children experiencing food insecurity in the U.S." —VERANDA

"If a house is not a home, then what exactly is? Home: A Celebration, a new book edited by decorator Charlotte Moss, and made in conjunction with No Kid Hungry, could be a meditation on this very prompt. What is more, its roster of contributors reads like a who’s who of creative circles. (Chef Alice Waters, AD Hall of Fame designer Kelly Wearstler, actress Bette Midler, and feminist icon Gloria Steinem are just a handful of the 125 contributors who share their thoughts.) Last but certainly not least, a portion of the proceeds will go to help children living with food insecurity." —ARCHITECTURAL DIGEST

"Designer and author Charlotte Moss is all action, all the time, even in the worst of times. So no surprise that when we all sat numb in the beginning of the pandemic, Moss was putting together a book, Home: A Celebration, to help raise money for No Kid Hungry, an organization that has been working to feed children during this long crisis. She was inspired by The Book of the Homeless, which Edith Wharton put together in 1916 to help raise money for war refugees." —CURBED

"In the early, horrific days of the pandemic Charlotte Moss took inspiration from a book Edith Wharton created in 1916 as a fundraiser for refugee children during the dark days of World War I and assembled her answer to it, Home A Celebration. In collaboration with No Kid Hungry she asked scores of talented friends to contribute a personal take on the meaning of home, gathering these to make a memorable keepsake that also benefits vulnerable children. One hundred and twenty-two generous spirits answered the call, from Joyce Carol Oates to Duro Olowu to Alice Waters, in thoughtful, unique and creative ways. The reminiscences, works of art, even recipes, add up to a fascinating ode to sanctuary and portrait of the way we see home." —LA DOLCE VITA