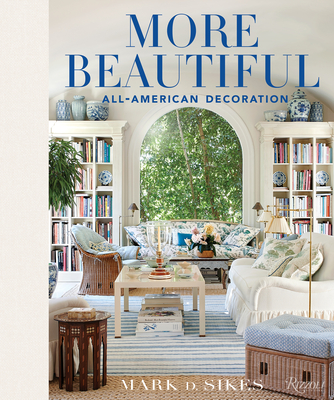 
Not On Our Shelves—Ships in 1-5 Days
The author of Beautiful is back with a new book of his interiors, filled with blue-and-white vignettes, wicker, saturated color, and pretty patterns.

Interior designer Mark D. Sikes burst onto the publishing scene with his New York Times best-selling first book, Beautiful. His new book, aptly titled More Beautiful, picks up where the first left off, in a celebration of classic, all-American decorating. The rooms featured in More Beautiful are divided into five distinct styles, all of which exude the happiness that comes with surrounding oneself with things you love. "Traditional" is chockablock with vibrant color, antique furniture, and heady doses of trim and pattern. "Country" is a new take on the style, where distressed finishes and modern silhouettes mingle for a warm welcome. "Coastal" is streamlined, with natural woven fibers, sun-faded linen and neutrals, and blues and whites galore. "Mediterranean" evokes faraway lands, with a saturated palette, ornate tiles and ikats, and iron details. Finally, there's "Beautiful": a peek inside Mark's own Hollywood Hills home, which nods to all of his favorite design signatures--including Italian wicker, blue and white, Anglo-Indian antiques, and more. With all-new photography by Amy Neunsinger, the book will inspire with rooms that are light-filled and crisply patterned, chic yet comfortable, and just the way people want to live today.
Mark D. Sikes is an esteemed interior designer working on projects throughout the United States. His work has been featured in AD, Veranda, Elle Decor, House Beautiful, the Wall Street Journal, C Magazine, Milieu, and Domino. His rooms for the Kips Bay Show House in New York, Greystone in Beverly Hills, the Southern Living Show House in Birmingham, and the Coastal Living Show House in Newport have been much celebrated. Mark has partnered with the best manufacturers in furniture and fabric to develop his signature product lines, including Chaddock, Soane, Hudson Valley Lighting, Schumacher, Annie Selke, Merida, and Blue Pheasant.
"This sought-after designer is back with his second book, breaking up style into five groups: Traditional, Country, Coastal, Mediterranean and Beautiful. Each chapter showcases projects filled with his signature bright, chic, and well-appointed rooms." — SERENDIPITY

"Blue-and-white vignettes dotted with wicker and antique furnishings have become interior designer Mark D. Sikes’s calling card. In More Beautiful: All-American Decoration, he shows just how versatile the classic style can be, highlighting a range of approaches, from the interplay of American and European aesthetics to mixing traditional and modern styles. It’s a discernment that results in wonderfully crisp yet livable interiors that continue to prove the longevity of Sikes’s Midas touch."
—ARCHITECTURAL DIGEST.COM