The Chemistry of Korean Foods and Beverages (ACS Symposium) (Hardcover) 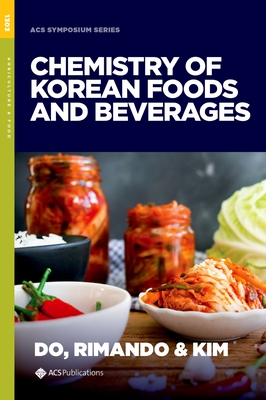 The Chemistry of Korean Foods and Beverages (ACS Symposium) (Hardcover)


Special Order—Subject to Availability
As people embrace new traditional cuisines, curiosity about the chemical composition follows. Korean foods and beverages have been inspired by Korea's unique location and climate. Some Koreans believe food is medicine, and this belief promotes the use of balanced and nutritional ingredients.
The most distinctive feature of Korean food is the prominent use of fermentation, including kimchi, gochujang, doenjang, and jeotgal. In this book, contributors describe the chemistry that contributes to the flavor and composition of Korean cuisine, enabling this book to appeal to food scientists
and chemists alike. It presents a scientific view of traditional and modern Korean foods that have essential roles in Korean culture, including health benefits, fermentation, processing, safety, packaging, microbial properties, and flavors.
Choon H. Do graduated with a B.S. in Chemistry from Seoul National University in 1969 and a Ph.D. in Polymer Chemistry from the Polytechnic University of New York in 1984. Currently, Do is the Director of the Korean Chemical Industry Specialists Association. He was Professor of Polymer Chemistry atSunchon National University in South Korea until 2011. Do was President of the Korean Chemical Society in 2010. Do also served as Editor-in-Chief for Polymer (Korea) of the Polymer Society of Korea, and Journal of Conservation Science, the official journal of the Korean Society of ConservationScience for Cultural Heritage. He co-edited Chemistry: Our Past, present and Future, with Dr. A. E. Pavlath. He was the first Chair of the ACS South Korea International Chemical Sciences Chapter in 2014. Agnes M. Rimando received her B.S. and M.S. in Pharmacy from the University of the Philippines in 1980 and 1985, respectively. She went on to obtain a Ph.D. in Pharmacognosy from the University of Illinois at Chicago in 1993. Before her passing, she was a research chemist at the Natural ProductsUtilization Research Unit of the U.S. Department of Agriculture, Agricultural Research Service, in Oxford, Mississippi. Rimando received many awards during her career including: Fellow of the American Chemical Society; Fellow of the Agricultural and Food Division of the American Chemical Society;the Kenneth A. Spencer Award for Outstanding Achievement in Food and Agricultural Chemistry; the Federal Laboratory Consortium Excellence in Technology Transfer Award; the USDA, ARS Mid-South Area Technology Transfer Award; and the USDA, ARS Mid South Area Senior Scientist of the Year Award. Sheserved as the Chair of the Agricultural and Food Division of the American Chemical Society and President of the American Council for Medicinally Active Plants. Youngmok Kim is Principal Scientist at Finlays, the world's leading producer of tea and natural extracts. Before joining Finlays research group, he worked at Synergy flavors as a senior research scientist for more than ten years. He obtained his M.S. in Food Science at the University of Florida, where he researched the postharvest treatment of tropical and sub-tropical fruits. He went on to get his Ph.D. at Texas A&M University, where he researched phytochemistry to discover factors that influence antioxidant polyphenolic stability during storage, as well as mechanisms of tea precipitation.He has been a professional member of the Institute of Food Science and Technology (IFT) since 2011 and serves as Contents Chair II at the food chemistry division leadership board that belongs to IFT. Since 2016, he has served as president of the Korean American Food Technologists Association.Additionally, in 2017 he was elected technical group E councilor of the Food, Nutrition, Ecology, and Agriculture sector of the Korean Science and Engineering Association.