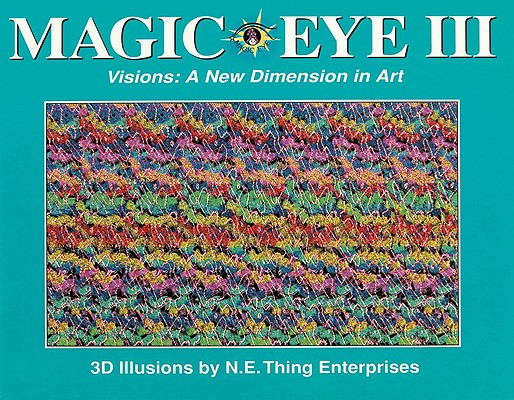 This is book number 3 in the Magic Eye series.


In bookstores and living rooms all over America--indeed, all over the world--people are scarcely believing what they see! Is it magic? No, it's Magic Eye 3D images! Magic Eye has left amazed and enthralled millions craving more. Stare into these seemingly abstract fields of color (no funny glasses required) and an enchanting 3D image materializes. You will be astounded by the depth and clarity of the totally hidden image that develops like an instant photo.
Magic Eye® ignited the worldwide 3D craze of the 1990s. In fact, Magic Eye I, II, and III appeared on the New York Times Best Seller list for a combined 73 weeks. More than 20 million copies of Magic Eye books have been sold in more than 25 languages. The weekly newspaper syndicated comic strip has appeared in newspapers around the world since 1994.