Forgive Everyone Everything (Paperback) 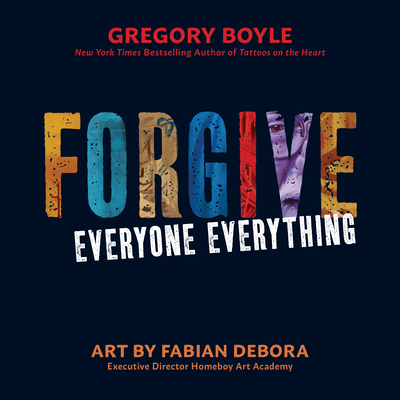 Forgive Everyone Everything (Paperback)


Not On Our Shelves—Ships in 1-5 Days
Gregory Boyle, SJ, spends his days at Homeboy Industries accompanying ex-gang members as they rebuild their lives. Forgive Everyone Everything is a powerful collection of his most poignant writings based on decades of experiences of loss and pain, redemption and renewal. All 50 reflections are accompanied by stunning street art from acclaimed artist and ex-gang member Fabian Debora, making this book a modern-day devotional that will provoke and inspire readers.

“There’s no denying how difficult things can be. But the way out to the place of resilience, the place of restoration, the place of not allowing your heart to be hardened by resentment, relies on one thing: forgive everyone everything.”–Gregory Boyle

Gregory Boyle is the founder of Homeboy Industries in Los Angeles, CA. Now in its 31st year, Homeboy traces its roots to when Boyle, a Jesuit priest with advanced degrees in English and theology, served as pastor of Dolores Mission Church, then the poorest Catholic parish in Los Angeles, which also had the highest concentration of gang activity in the city. Homeboy has become the largest gang-intervention, rehabilitation, and reentry program in the world, and employs and trains gang members and felons in a range of social enterprises, as well as provides critical services to thousands of men and women each year who walk through its doors seeking a better life. Father Boyle has received the California Peace Prize, the James Beard Foundation Humanitarian of the Year Award, and the University of Notre Dame’s Laetare Medal. He was inducted into the California Hall of Fame and named a 2014 Champion of Change by the White House. He is also the author of the New York Times bestsellers Tattoos on the Heart: The Power of Boundless Compassion and Barking at the Choir: The Power of Radical Kinship.