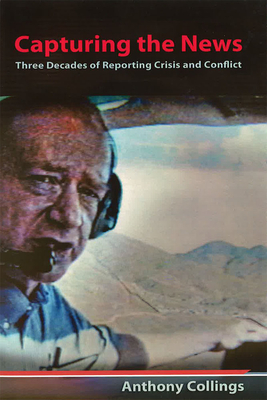 Anthony Collings found himself in his share of difficult situations in his thirty-four years as a newsman. Like being captured by AK-47–toting Syrians in Lebanon in 1981 while looking for missiles that threatened a new outbreak of hostilities with Israel, or being “detained” by the KGB in Moscow in 1967 during his first foreign posting for the Associated Press filing stories about Soviet dissidents.

Name a hot spot, and Collings has likely been there. From AP correspondent to Newsweek bureau chief to CNN reporter, he covered the Middle East, Rome, Moscow, London, Paris, and Washington. Now he has gathered stories about his work in a book that is both a journalist’s memoir and a commentary on the current ethical crises in the news media and how to address them.
Brimming with entertaining stories about journalism, especially the chaotic early years at CNN when he and his colleagues established the first major cable news network, Collings’s book reveals the dangers and pressures of covering the news and the difficulties of overcoming obstacles to the truth. He recalls smuggling tapes out of Poland after the Communists had imposed martial law; flying dangerously near Libya’s “Line of Death”; interviewing world figures from Brezhnev to Kaddafi and Arafat; and winning awards for covering Iran-Contra and the Oklahoma City bombing. Collings brings fresh insights to the Oliver North affair and examines how the press was suckered in its coverage of the Jessica Lynch prisoner-of-war story in 2003. He voices his concerns regarding oversimplified reporting of complex issues and poses provocative questions about covering terrorism.
In this book, Collings presents an insider’s appraisal of the American news media’s failings and accomplishments. Easy to read, informative, and thoughtful, Capturing the News will enlighten general readers interested in how journalists cover current affairs, while offering newsmen food for thought about the craft and ethics of journalism.
Anthony Collings is the author of Words of Fire: Independent Journalists Who Challenge Dictators, Druglords, and Other Enemies of a Free Press. He now teaches communication studies at the University of Michigan and lives in Ann Arbor.
“Capturing the News is an informative, thoughtful, and sometimes even charming book. Reading Collings’s pages is like listening to a favorite uncle. The mixture of journalism tales from overseas, and from the nation’s capitol, makes this book valuable as a history text, as well as a journalism text.”—Steve Weinberg, author of Taking on the Trust: How Ida Tarbell Brought Down John D. Rockefeller and Standard Oil

“Tony Collings's conversational memoir enables readers to experience vicariously the risks, sacrifices and triumphs of a dedicated, resourceful and principled correspondent for the Associated Press, Newsweek and a fledgling CNN—from the drama of reporting in secretive Soviet Russia, smuggling video reports out of martial-law Poland and enduring captivity in chaotic Lebanon to the vital behind-the-scenes details of getting news from faraway places into print and onto television before digital technology changed everything. With apologies to the late Walter Cronkite, this is indeed the way it was.”—Len Downie, Vice President at Large and former Executive Editor of the Washington Post

“At home or abroad, the effective journalist questions what he sees, what he’s told and even his own motives in reporting a story. As basic as that seems, veteran reporter and teacher Tony Collings is right to remind us that in the blurry world of today’s purported journalism, it’s important to keep asking those questions.”—Charles Bierbauer, Dean, University of South Carolina and former CNN and ABC correspondent