As I Saw It: A Reporter's intrepid journey (Hardcover) 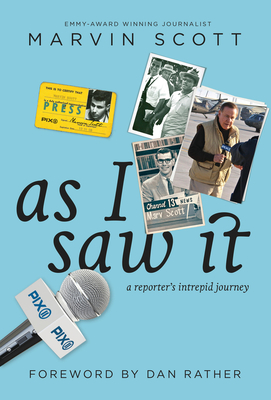 As I Saw It: A Reporter's intrepid journey (Hardcover)

By Marvin Scott, Dan Rather (Foreword by)


Special Order—Subject to Availability
Over a career spanning more than 50 years, veteran journalist Marvin Scott has seen it all. From international headlines to local heroes, the eleven-time Emmy Award–winner and member of the New York State Broadcasters Hall of Fame has covered the news with objectivity and integrity, bringing journalistic excellence to every level of reporting. Scott has interviewed six presidents, visited the frontlines of war in the Middle East and Asia, and witnessed the rise of America’s space program—all in a day’s work.

Now, in As I Saw It: A Reporter’s Intrepid Journey, Scott reflects on the stories that have stuck with him personally over the years, and the people who gave them life. Alongside marches with Dr. Martin Luther King, Jr. and tense meetings with Yasser Arafat, Scott brings us Burt and Linda Pugach, the couple whose lifelong marriage was forged in deadly obsession; Abraham Zapruder, who shot history’s most infamous piece of film; Charlie Walsh, the everyman hero who gave the banks a run for their money; and Stephanie Collado, the eleven-year-old girl who needed a heart and touched his. From political scandals to hauntings at Amityville, local tragedies, triumphs and absurdities find their place alongside accounts of crime and redemption, war and celebrity on a national scale, all told with Scott’s signature passion and candor.

As I Saw It pairs Scott’s unique storytelling and photography to give readers a new look at the singular experiences of a lifelong reporter, and the stories that shaped a generation.