Bright as an Autumn Moon: Fifty Poems from the Sanskrit (Paperback) 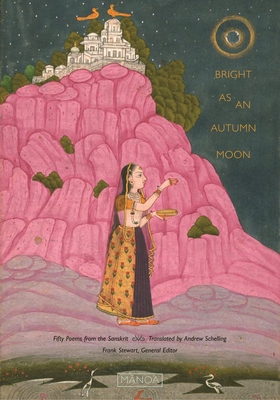 Bright as an Autumn Moon: Fifty Poems from the Sanskrit (Paperback)

Bright as an Autumn Moon presents Sanskrit verses composed from the fourth to the twelfth centuries. Translated into contemporary English by American poet Andrew Schelling, they illuminate the ardent worship by lovers of their beloved--both human and divine. Each translation is accompanied by the Sanskrit original, transliteration, glossary, and commentary.

Andrew Schelling has written, edited, or translated twenty books. He studied Sanskrit at U.C. Berkeley and began to translate from its classical poetry tradition around 1978. His first book, Dropping the Bow: Poems of Ancient India, received the Academy of American Poets translation award in 1992, the first time the Academy had honored work done from an Asian language. He has edited The Oxford Anthology of Bhakti Literature and Love and the Turning Seasons: India's Poetry of Spiritual and Erotic Longing. He teaches at Naropa University, in Boulder, Colorado, and Deer Park Institute, in India's Himalayan foothills. The art in the volume consists of Deccani miniature paintings from the late eighteenth century from an album (muraqqa') compiled in the late nineteenth century, possibly later. The work is included courtesy of The Walters Art Museum, Baltimore.