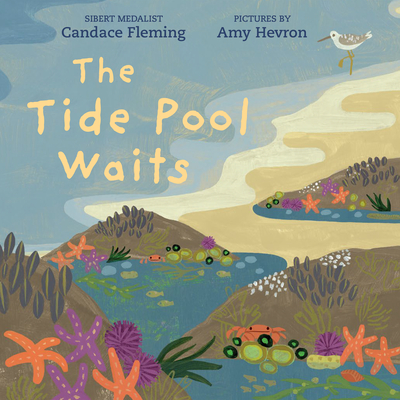 
In Stock—Click for Locations
Dive into the rich ecology of tide pools and watch a hidden world spring in this masterful nonfiction picture book for very young readers.

Twice a day when the tide goes out, an astonishing world is revealed in the tide pools that form along the Pacific Coast.

Some of the creatures that live here look like stone. Others look like plants. Some move so slowly it’s hard to tell if they’re moving at all, while others are so fast you’re not sure you really saw them. The biggest animals in the pool are smaller than your hand, while the smallest can’t be seen at all without a microscope.

During low tide, all these creatures – big, small, fast, slow – are exposed to air and the sun’s drying heat. And so they have developed ways to survive the wait until the ocean’s return.

Candace Fleming is the author of Honeybee, which received an Orbis Pictus Honor and 7 starred reviews. She brings her knack for making science and nature appealing to the very young in The Tidepool Waits with detailed accounts of dozens of species of sea life, culminating in a perfect primer for students and nature lovers taking their first trip to the shore. Her text is accompanied by effervescent artwork by Amy Hevron and substantial backmatter.

A Junior Library Guild Gold Standard Selection!
Candace Fleming is the author of more than thirty distinguished books for children including Honeybee: The Busy Life of Apis Mellifera, which received an NCTE Orbis Pictus Honor, 7 starred reviews, and was a Subaru Award finalist. Her book The Family Romanov: Murder, Rebellion, and the Fall of Imperial Russia received, among other awards, the Boston Globe-Horn Book Award for Nonfiction. She also received the NCTE Orbis Pictus Award and a Sibert Honor for Giant Squid. She is also the author of Cubs in the Tub: The True Story of the Bronx Zoo’s First Woman Zookeeper, illustrated by Julie Downing She lives in Chicago.


Amy Hevron is an illustrator, designer and children’s book author. She wrote and illustrated Dust Bunny Wants a Friend and illustrated Trevor by Jim Averbeck, which received multiple starred reviews. In both 2015 and 2016, she received the Portfolio Honor Award from the Society of Children's Book Writers and Illustrators. She lives in Seattle with her family.

★ "Onomatopoeic text and clear images together convey the phenomenon of the tide pool clearly to even landlocked readers."—Publishers Weekly, Starred Review

"Fleming makes great use of action verbs, engaging descriptions, and just the right amount of repetition to draw readers into the tide pool and hold their interest. The dynamic text placement helps reinforce the movement of the ocean, while Hevron’s illustrations give life to the words and with every graceful overlay of line and wash, effectively depict the creatures and the ocean itself."—School Library Journal