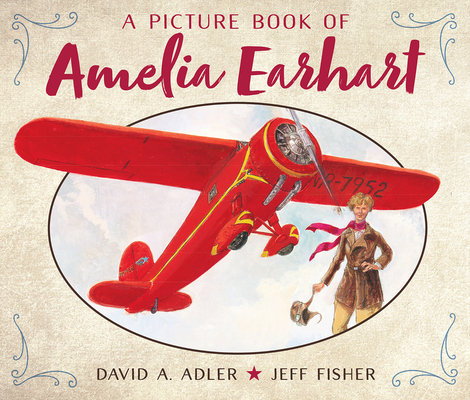 
Special Order—Subject to Availability
In 1937, Amelia Earhart vanished while trying to become the first woman to fly around the globe. Today, experts search for clues to what happened-- but Earhart's legacy as a pioneering woman pilot is greater than the mystery surrounding her disappearance.

You may know Amelia Earhart as one of history's most beloved aviators, but did you know she grew up playing football and studied automobile-engine repair? This clear and concise picture book biography with bright, colorful illustrations follows brave Amelia throughout her inspiring lifetime.

From her first plane ride, on Christmas Day in 1920, to her famous flight across the Atlantic Ocean in 1928, Amelia's life took on new purpose when she discovered her love of flying. She later became the first person to fly alone across both the Atlantic and Pacific oceans, and had many other adventures that brought her to places like Hawaii and Mexico. In 1937, Amelia vanished while attempting to fly around the world. Her mysterious disapperance and incredible life story have fascinated the world ever since.

This entry in Adler's well-known series includes a timeline, author's note, and bibliography. Repackaged paperback edition has an updated cover.

For almost thirty years, David Adler’s Picture Book Biography series has profiled famous people who changed the world. Colorful, kid-friendly illustrations combine with Adler’s “expert mixtures of facts and personality” (Booklist) to introduce young readers to history through compelling biographies of presidents, heroes, inventors, explorers, and adventurers. These books are ideal for first and second graders interested in history, or who need reliable sources for school book reports.
David A. Adler is the author of many popular books for children, including biographies, math books, and Judaica. His strong interest in history and biography led to his bestselling Picture Book Biography series. He lives in New York State with his wife and family.

Jeff Fisher (1955 - 2014) was a professional illustrator who made his picture book debut with A Picture Book of Amelia Earhart. He lived with his family in New York.