That Further Shore: A Memoir of Irish Roots and American Promise (Paperback) 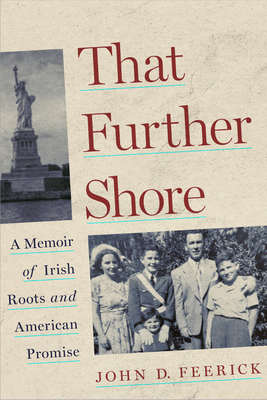 That Further Shore: A Memoir of Irish Roots and American Promise (Paperback)

A rare and evocative memoir of a respected constitutional scholar, dedicated public servant, political reformer, and facilitator of peace in the land of his ancestors.

John D. Feerick's life has all the elements of a modern Horatio Alger story: the poor boy who achieves success by dint of his hard work. But Feerick brought other elements to that classic American success story: his deep religious faith, his integrity, and his paramount concern for social justice. In his memoir, That Further Shore, Feerick shares his inspiring story, from his humble beginnings: born to immigrant parents in the South Bronx, going on to practice law, participating in framing the U.S. Constitution's Twenty-Fifth Amendment, serving as dean of Fordham Law, and serving as President of the New York City Bar Association and chair of state commissions on government integrity. Beginning with Feerick's ancestry and early life experiences, including a detailed genealogical description of Feerick's Irish ancestors in County Mayo and his laborious quest to identify them and their relationships with one another, the book then presents an evocative survey of the now-vanished world of a working-class Irish Catholic neighborhood in the South Bronx. Feerick's account of how he financed his education from elementary school through law school is a moving tribute to the immigrant work ethic that he inherited from his parents and shared with many young Americans of his generation. The book then traces Feerick's career as a lawyer and how he gave up a lucrative partnership in a prestigious New York City law firm at an early age to accept the office of Dean of the Fordham School of Law at a fraction of his previous income because he felt it was time to give back something to the world. John Feerick has consistently shown his commitment to the law as a vocation as well as a profession by his efforts to protect the rights of the poor, to enable minorities to achieve their rightful places in American society, and to combat political corruption. That Further Shore is an inspiring memoir of how one humble and decent man helped to make America a more just and equitable society.
John D. Feerick (Author) John Feerick is a professor of law at Fordham Law School and the occupant of the Sidney C. Norris Chair of Law in Public Service. He teaches and writes in areas of the Constitution, legal ethics, and conflict resolution. His books include the third edition of The Twenty-Fifth Amendment: Its Complete History and Applications, and From Failing Hands: The Story of Presidential Succession, which was helpful to the framers of the Constitution's Twenty-Fifth Amendment. Thomas J. Shelley (Foreword By) Monsignor Thomas J. Shelley, a priest of the Archdiocese of New York, is Emeritus Professor of Church History at Fordham University. His publications include The Bicentennial History of the Archdiocese of New York: 1808-2008 and Fordham, A History of the Jesuit University of New York: 1841-2003 (Fordham).