Stan Lee's How to Draw Superheroes: From the Legendary Co-creator of the Avengers, Spider-Man, the Incredible Hulk, the Fantastic Four, the X-Men, and Iron Man (Paperback) 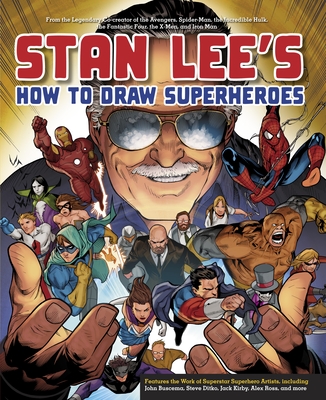 Stan Lee's How to Draw Superheroes: From the Legendary Co-creator of the Avengers, Spider-Man, the Incredible Hulk, the Fantastic Four, the X-Men, and Iron Man (Paperback)


Not On Our Shelves—Ships in 1-5 Days
The third installment in comics icon Stan Lee's series showing readers how to draw some of the most exciting and dynamic superheroes of all time.

Spider-Man, the X-Men, the Fantastic Four, Iron Man, the Incredible Hulk, and the Avengers all share a common trait -- these hugely popular Marvel Comics superheroes were  co-created by the legendary Stan Lee. Now, Lee shows readers everything they'll need to make their own mighty superheroes, just like his classic creations. Lee exposes his secret tools and techniques for bringing strong, inspiring heroes and heroines to life. He even shows aspiring creators how to expand their super-universes with evil villains, trusty sidekicks, brutes and monsters, super-pets, secret hideouts, and more! These invaluable insights from one of the greatest superhero creators of all time are must-haves for all fans of Lee's legendary superhero comic work.
STAN LEE is an icon in the comic book world. He is the co-creator of the Mighty Marvel Universe and such classic and immortal characters as the Avengers, Spider-Man, the Incredible Hulk, Iron Man, the Fantastic Four, Daredevil, and the X-Men. He has conceived more billion-dollar franchises than any other comics creator, and more than 2 billion comics based on his creations have sold in more than 75 countries and in 25 languages. Stan Lee is the former president and chairman of Marvel Comics and was awarded the National Medal of Arts in 2008. He is currently Chairman Emeritus of Marvel Comics and the Chief Creative Officer of POW! Entertainment.