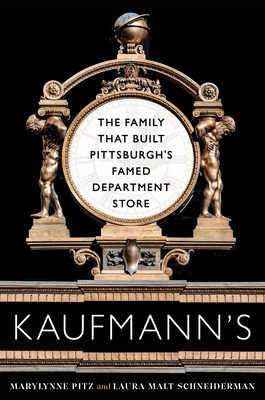 In 1868, Jacob Kaufmann, the nineteen-year-old son of a German farmer, stepped off a ship onto the shores of New York. His brother Isaac soon followed, and together they joined an immigrant community of German Jews selling sewing items to the coal miners and mill workers of western Pennsylvania. After opening merchant tailor shops in Pittsburgh’s North and South sides, the Kaufmann brothers caught the wave of a new type of merchandising—the department store—and launched what would become their retail dynasty with a downtown storefront at Fifth Avenue and Smithfield Street. In just two decades, Jacob and his brothers had ascended Pittsburgh’s economic and social ladder, rising from hardscrabble salesmen into Gilded Age multimillionaires.

Generous and powerful philanthropists, the Kaufmanns left an indelible mark on the city and western Pennsylvania. From Edgar and Liliane’s famous residence, the Frank Lloyd Wright masterpiece called Fallingwater, to the Kaufmann clock, a historic landmark that inspired the expression “meet me under the clock,” to countless fond memories for residents and shoppers, the Kaufmann family made important contributions to art, architecture, and culture. Far less known are the personal tragedies and fateful ambitions that forever shaped this family, their business, and the place they called home. Kaufmann’s recounts the story of one of Pittsburgh’s most beloved department stores, pulling back the curtain to reveal the hardships, triumphs, and complicated legacy of the prominent family behind its success.

Marylynne Pitz is an award-winning journalist covering art, architecture, books, and history. She was a member of the news team that won the Pulitzer Prize for coverage of the Tree of Life shooting in 2018. She has won five Golden Quills, an Inland Press Association award for investigative reporting, and a Matrix Award. A native of Indianapolis, she has lived in Pittsburgh since 1980.

Laura Malt Schneiderman is a journalist and web developer in Pittsburgh. She has won seven Golden Quills and was part of a team that won the Scripps Howard Edward J. Meeman Award in 2011. Originally from Saint Louis, she has worked in journalism in Washington, DC, and Pennsylvania.

“Journalists Marylynne Pitz and Laura Malt Schneiderman chronicle the proud voyage and eventual capsizing of this emblematic downtown dreadnought in Kaufmann’s: The Family That Built Pittsburgh’s Famed Department Store. The result is a revealing case study of the type of retail institution that once played such a prominent role in American life—as well as a portrait of the glittering Kaufmann family.” —Wall Street Journal

“This popular history . . . is as pleasingly dense with fact, incident, and anecdote as its namesake store was with shirts, handbags, and housewares. Even old-timers will learn something about the store and the fractious—and even tragic—family behind it.” —Pittsburgh Post-Gazette

"This popular history, by Marylynne Pitz and Laura Malt Schneiderman, is as pleasingly dense with fact, incident, and anecdote as its namesake store was with shirts, handbags and housewares. Even old-timers will learn something about the store and the fractious – and even tragic – family behind it."--Bill O'Driscoll, The Pittsburgh Post Gazette

“I love this book. It’s an immigrant story, important Jewish history, a tale of amazing retail success, some juicy inside family info, and it also offers a concise explanation for some of the local, national, and international forces that allowed the rise and eventual end of the great era of beautiful, big, important department stores. It’s also got Fallingwater, the old tradition of holiday windows, fancy boutiques, and the Tic-Toc restaurant. It’s an all-important Pittsburgh history.” —Rick Sebak, public television writer and producer, WQED Pittsburgh


“During the great era of Pittsburgh innovation and industry, one of the most intriguing families to find prosperity in Pittsburgh was the Kaufmanns. Famous for their hugely successful department store, and for commissioning the great architectural triumph of Fallingwater, the Kaufmanns achieved great success and endured a series of family tragedies, including antisemitism in their native Germany and here in America. This rich, highly detailed narrative is written by two of Pittsburgh’s finest journalists. Anyone captured by Pittsburgh history will want to know the Kaufmann saga.” —Maxwell King, author of American Workman: The Life and Art of John Kane and The Good Neighbor: The Life and Work of Fred Rogers

“Marylynne Pitz and Laura Malt Schneiderman may have written a book about the Kaufmann family, but they really have written the story of a time, a country, and a way of life that today exists only in memory but that deserves to be remembered and celebrated. It is a Pittsburgh story, to be sure, but it really is an American story—of triumph and tragedy, of striving and achieving.” —David Shribman, Pulitzer Prize winner and executive editor emeritus of the Pittsburgh Post-Gazette

“What do you get when two award-winning journalists team up to combine finely honed storytelling skills with high-tech modern research techniques? You get first-rate history. This remarkable book is at once a family history and a biography of their city—Pittsburgh. The authors trace the Kaufmanns’ American journey from fresh-off-the-boat, luggageless immigrants to spectacularly successful merchants who pioneered the modern department store and became philanthropists of the first rank. Pittsburghers will delight in the details behind the famous clock at Fifth & Forbes, Kaufmann’s holiday windows, and Wright’s legendary Fallingwater. Readers will also be intrigued by stories of family feuds, infidelities, tragedy, lavish lifestyles, and business deals and missteps.”—Andrew E. Masich, president and CEO, Senator John Heinz History Center