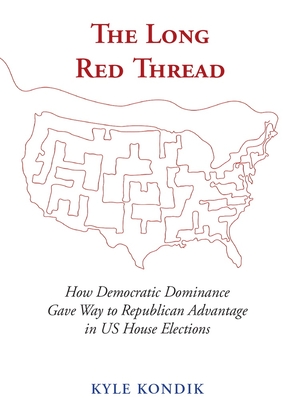 An incisive study that shows how Republicans transformed the US House of Representatives into a consistent GOP stronghold—with or without a majority.

Long-term Democratic dominance in the US House of Representatives gave way to a Republican electoral advantage and frequently held majority following the GOP takeover in 1994. Republicans haven’t always held the majority in recent decades, but nationalization, partisan realignment, and the gerrymandering of House seats have contributed to a political climate in which they've had an edge more often than not for nearly thirty years.

The Long Red Thread examines each House election cycle from 1964 to 2020, surveying academic and journalistic literature to identify key trends and takeaways from more than a half-century of US House election results in order to predict what Americans can expect to see in the future.

Kyle Kondik is one of the nation’s top analysts of US House elections. He is the managing editor of Sabato’s Crystal Ball, a nonpartisan election forecasting newsletter published by the University of Virginia Center for Politics. He is the author of The Bellwether: Why Ohio Picks the President, also from Ohio University Press, and has edited and contributed to several recent books on US elections. As a frequently cited expert on American politics, Kondik has appeared on CNN, Fox News, MSNBC, PBS NewsHour, and Comedy Central’s The Daily Show, and his writing has appeared in the New York Times, Washington Post, Wall Street Journal, Politico Magazine, and other publications.

“Kyle Kondik has the rare ability to combine real-world mastery of politics with the erudition of political science research. In The Long Red Thread, he unspools a spritely and much-needed history of the last six decades of House elections as the chamber morphed from a safe and sleepy Democratic bastion to today’s cauldron of hyper-nationalized politics.”—Walter Shapiro, staff writer for the New Republic and Roll Call columnist

“Kyle Kondik is one of the brightest young stars in the firmament of election analysis, and his new book, The Long Red Thread, proves that anew. Kondik shows how Democrats lost their twentieth-century advantage in the critical process of redistricting, leaving Republicans with yet another arrow in their quiver for control of American politics. Kyle’s style, rich with colorful history and relevant detail, is sure to draw you in as he reveals some well-kept secrets of political power.”—Larry J. Sabato, Robert Kent Gooch Professor of Politics, University of Virginia, and founder/director of the UVA Center for Politics

“In The Long Red Thread, Kyle Kondik provides an in-depth analysis of an important trend that has largely been ignored by scholars: the long-term shift in competition in US House elections that has given Republicans a narrow but significant advantage. This book is a must-read for scholars and students of contemporary American electoral politics.”—Alan Abramowitz, Emory University, author of The Great Alignment: Race, Party Transformation and the Rise of Donald Trump

“The Long Red Thread presents a detailed but concise account of the evolution of district-level voting patterns in congressional elections since 1964 that, among other things, deftly exposes the electoral roots of Congress’s current susceptibility to stalemate and dysfunction. Anyone hoping to understand how American government arrived at its current unhappy state will find it illuminating.”—Gary C. Jacobson, University of California, San Diego, author of Money in Congressional Elections, The Politics of Congressional Elections, and The Electoral Origins of Divided Government

“Recounting more than a half-century of electoral history, Kyle Kondik documents how partisanship and electoral advantage can be amplified through reapportionment and redistricting practices. A crucially important story of how the House electoral map that once favored Democrats now tilts toward the GOP, The Long Red Thread is a must read for anyone seeking to understand the structures that affect electoral outcomes and determine our political futures.”—Douglas B. Harris, Loyola University Maryland, coauthor of At War with Government: How Conservatives Weaponized Distrust from Goldwater to Trump