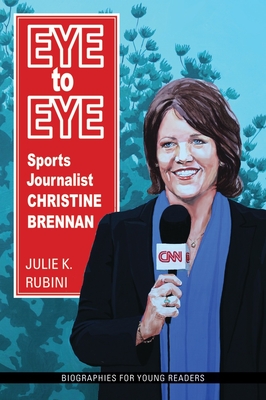 Christine Brennan, the USA Today sports columnist, author, and commentator, uses her voice to advocate for diversity and equality in the world of sports, and her wisdom to encourage future journalists. Her passion for sports was sparked by her dad, who encouraged her to participate in athletics and, as he said, “smell the game”—go watch baseball and football games together.

As a child, Christine wrote daily entries in her diary and listened to play-by-play coverage on her radio. She pursued this love of words through journalism school and applied her passion for sports by reporting on them for various newspapers. Since then, she has portrayed the setbacks and triumphs of athletes, all the while fighting her own battles for success—and respect—as a female journalist.

From knocking down barriers in NFL locker rooms to covering every Olympics since 1984 to being the go-to commentator whenever scandal occurs in the sports world, Christine Brennan has done it all. Eye to Eye invites young readers to learn more about this remarkable journalist and perhaps to nurture their own dreams of investigating and telling important stories.

Julie K. Rubini is the founder of Claire’s Day, a children’s book festival in honor of her late daughter. She is the author of Hidden Ohio, Missing Millie Benson: The Secret Case of the Nancy Drew Ghostwriter and Journalist, and Virginia Hamilton: America’s Storyteller. But most of all, she cherishes her roles as wife to Brad and mother to daughter Kyle and son Ian.

“Julie Rubini does justice to the story of Christine Brennan—the one reporter that has truly gone deep into my story. She is an amazing journalist who is dedicated to honest sports reporting.”—Chuck Ealey, former quarterback, University of Toledo and Canadian Football League, and 1972 Grey Cup Most Valuable Player

“Julie Rubini has captured the essence of Christine Brennan in this wonderful new biography. Chris began playing baseball in the backyard and grew up to be an award-winning journalist. She is a trailblazer, an honorable icon and a friend, at home on the global stage or in your backyard. She is, simply, what we all want to be.”—Hall of Fame sportscaster Lesley Visser

Praise for Julie K. Rubini
“If the children you know think biographies are boring, this one will make them reconsider.”—Kirkus Reviews (starred review of Virginia Hamilton: America’s Storyteller)

Praise for Julie K. Rubini
“The biography is eminently readable and well organized … Appended with an impressive wealth of back matter.”—The Horn Book (review of Missing Millie Benson: The Secret Case of the Nancy Drew Ghostwriter and Journalist)