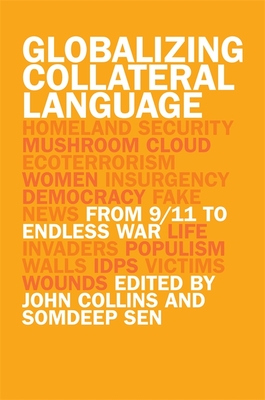 Language is never just a means of communication. It terrorizes. And, especially in times of war, it has the ability to target civilians and generate fear as a means of producing specific political outcomes, most notably the passive and active acceptance of state violence itself. For this reason, the critical examination of language must be a central part of any effort to fight imperialism, militarism, demagoguery, racism, sexism, and other structures of injustice. Globalizing Collateral Language examines the discourse surrounding 9/11 and its entrenchment in global politics and culture.

To interrogate this wartime lexicon of "collateral language," editors John Collins and Somdeep Sen have assembled a volume of critical essays that explores the long shadow of America's "War on Terror" discourse. They illuminate how this language has now found resonance across the globe and in political projects that have little to do with the "War on Terror." Two decades after the attacks of September 11, 2001, this book calls on us to resist the tyranny of collateral language at a time when the need for such interventions in the public sphere is more urgent than ever.
Somdeep Sen (Editor) SOMDEEP SEM is an associate professor in international development studies at Roskilde University. He is the author of Decolonizing Palestine: Hamas between the Anticolonial and Postcolonial and the coauthor of The Palestinian Authority in the West Bank: The Theatrics of Woeful Statecraft with Michelle Pace. He has also published in the Huffington Post, Open Democracy, and the London Review of Books, as well as contributed to many other edited collections. John Collins (Editor) JOHN COLLINS is professor of global studies at St. Lawrence University and the editorial director of Weave News. He is the author of Global Palestine and coauthor with Eve W. Stoddard of Social and Cultural Foundations in Global Studies. He lives in Canton, New York.