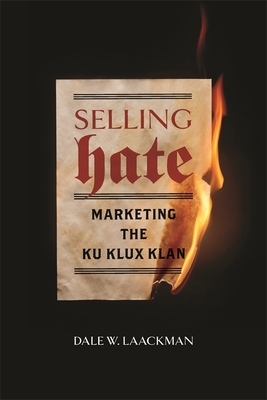 Selling Hate is a fascinating and powerful story about the power of a southern PR firm to further the Ku Klux Klan's agenda. Dale W. Laackman's uncovered never-before-published archival material, census records, and obscure books and letters to tell the story of an emerging communications industry--an industry filled with potential and fraught with peril.

The brilliant, amoral, and spectacularly bold Bessie Tyler and Edward Young Clarke--together, the Southern Publicity Association--met the fervent William Joseph Simmons (founder of the second KKK), saw an opportunity, and played on his many weaknesses. It was the volatile, precarious terrain of post-World War I America. Tyler and Clarke took Simmons's dying and broke KKK, with its two thousand to three thousand associates in Georgia and Alabama, and in a few short years swelled its membership to nearly five million. Chapters were established in every state of the union, and the Klan began influencing American political and social life. Between one-third and one-half of the eligible men in the country belonged to the organization. Even to modern sensibilities, the extent of Tyler and Clarke's scheme is shocking: the limitlessness of their audacity; the full-scale and ongoing con of Simmons; the size of the personal fortunes they earned, amassed, and stole in the process; and just how easily and expertly they exploited the particular fears and prejudices of every corner of America. You will recognize in this pair a very American sense of showmanship and an accepted, even celebrated, brash entrepreneurial hustle. And as their story winds down, you will recognize the tainted and ultimately ineffectual congressional hearings into the Klan's monumental growth.
DALE W. LAACKMAN is an award-winning television producer, director, and writer turned historian and author whose long career includes positions at WGN-TV and Tribune Entertainment Company. He lives in suburban Chicago.