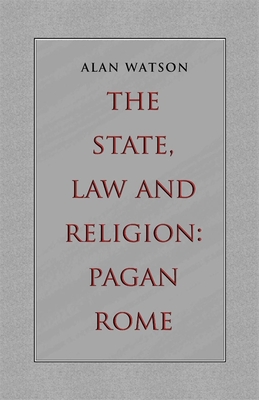 Written by one of our most respected legal historians, this book analyzes the interaction of law and religion in ancient Rome. As such, it offers a major new perspective on the nature and development of Roman law in the early republic and empire before Christianity was recognized and encouraged by Constantine.

At the heart of the book is the apparent paradox that Roman private law is remarkably secular even though, until the late second century B.C., the Romans were regarded (and regarded themselves) as the most religious people in the world. Adding to the paradox was the fact that the interpretation of private law, which dealt with relations between private citizens, lay in the hands of the College of Pontiffs, an advisory body of priests. Alan Watson traces the roots of the paradox--and the way in which Roman law ultimately developed--to the conflict between patricians and plebeians that occurred in the mid-fifth century B.C. When the plebeians demanded equality of all citizens before the law, the patricians prepared in response the Twelve Tables, a law code that included only matters considered appropriate for plebeians. Public law, which dealt with public officials and the governance of the state, was totally excluded form the code, thus preserving gross inequalities between the classes of Roman citizens. Religious law, deemed to be the preserve of patrician priests, was also excluded. As Watson notes, giving a monopoly of legal interpretation to the College of Pontiffs was a shrewd move to maintain patrician advantages; however, a fundamental consequence was that modes of legal reasoning appropriate for judgments in sacred law were carried over to private law, where they were often less appropriate. Such reasoning, Watson contends, persists even in modern legal systems. After sketching the tenets of Roman religion and the content of the Twelve Tables, Watson proceeds to such matters as formalism in religion and law, religion and property, and state religion versus alien religion. In his concluding chapter, he compares the law that emerged after the adoption of the Twelve Tables with the law that reportedly existed under the early Roman kings.
Alan Watson, Distinguished Research Professor and Ernest P. Rogers Chair at the University of Georgia School of Law, is regarded as one of the world's foremost authorities on Roman law, comparative law, legal history, and law and religion.