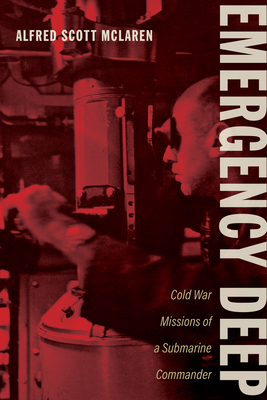 
In Stock—Click for Locations
Conveys in dramatic detail the high-risk, covert operations of a nuclear attack submarine during the zenith of the Cold War

Captain Alfred Scott McLaren served as commander of the USS Queenfish (SSN 651) from September 1969 to May 1973, the very height of the Cold War. As commander, McLaren led at least six major clandestine operations, including the first-ever exploration of the entire Siberian Continental Shelf: a perilous voyage detailed in his previous book Unknown Waters.

Emergency Deep: Cold War Missions of a Submarine Commander conveys the entire spectrum of Captain McLaren’s experiences commanding the USS Queenfish, mainly in the waters of the Russian Far East and also off Vietnam. McLaren offers a riveting and deeply human story that illuminates the intensity and pressures of commanding a nuclear attack submarine in some of the most difficult circumstances imaginable.

Relying on his own notes and records, as well as discussions with former officers and shipmates, McLaren focuses on operational matters both great and small. He recounts his unique perspectives on attack-submarine tactics and exploratory techniques in high-risk or uncharted areas, matters of leadership and team-building and the morale of his crews, and the innumerable and often unforeseen ways his philosophy of command played out on a day-to-day basis, with consequences that ran the gamut from the mundane to the dire and life-threatening.

Readers are also treated to significant new information and insight on submarine strategy, maneuvers, and culture. Such details illuminate and bring to life, with both great humor and gravitas, the intensity and pressures on those engaged in covert missions on nuclear attack submarines.

Alfred Scott McLaren, PhD and retired US Navy Captain, is recipient of the Distinguished Service Medal and two Legions of Merit, president emeritus of the Explorers Club, former senior pilot of the SAS Super Aviator submersible, and president emeritus of the American Polar Society. He is author of Unknown Waters: A First-Hand Account of the Historic Under-Ice Survey of the Siberian Continental Shelf by USS Queenfish (SSN-651) and Silent and Unseen: On Patrol in Three Cold War Attack Submarines.

“The US Navy’s Submarine Force has a reputation of being the ‘Silent Service.’ This refers not only to actual operations and tactics, but also the Force’s aversion to disclosing its history. Except for well publicized voyages of endurance or exploration by early nuclear-powered submarines, the US Submarine Force has declassified very few records of Cold War submarine operations. As a result, retired US Navy Captain (ret.) Alfred Scott McLaren’s new book is a welcome addition to a growing body of Cold War submarine memoirs and unofficial histories, including two of his previous works.:
—Michigan War Studies Review

“Emergency Deep is authored by a highly rated, successful commander of a combat submarine in a conflict that while ‘cold’ could have gone ‘hot’ at any time. The human side—the personalities, the honest discussions of human behavior, including tension, humor, and occasional terror—are handled very well. The volume does an exceptional job of being relatable to anyone who might never get a chance to be in a virtual pressure cooker like a nuclear submarine.”
—James P. Delgado, author of War at Sea: A Shipwrecked History from Antiquity to the Twentieth Century and Silent Killers: Submarines and Underwater Warfare


“Emergency Deep would be of interest to anyone interested in Cold War submarine operations, as well as Arctic exploration. The chapters are brief, making this book easy to read in short sittings. The frequent references to the first nuclear submarine, USS Nautilus (SSN-571), and its 1958 North Pole voyage (the first fully submerged transit under the North Pole), as well as to earlier Arctic voyages, provide useful context and reference points for the Queenfish’s journey. McLaren conveys both the stunning beauty of the Arctic and the very real dangers it contains, from blizzards to icebergs to polar bears. And while many people consider the very idea of being in a submarine claustrophobic-never mind being aboard one for weeks or months at a time—Emergency Deep increases that sense of claustrophobia by inviting the reader to imagine not just being in a submarine and underwater, but under a thick layer of ice separating the submarine and its crew from the world above.”
—The Journal of Military History

“This firsthand account reveals the trials, tribulations, and triumphs of one of the finest American submarine skippers of the Cold War, Captain Fred McLaren. McLaren possessed the rare combination of technical and nuclear knowledge and tactical-operational brilliance. His story reflects a real-life Hunt for Red October.”
—Scott Laidig, author of Al Gray, Marine: The Early Years, 1950–1967, Vol. 1 and Al Gray, Marine: The Early Years, 1968–1975, Vol. 2


“A superb portrayal of a senior command officer conducting some of the most daring, pioneering, exploratory, and military missions it is possible to conceive. It is the description, in part, of primary original geographic, oceanographic, and bathymetric research in some of the most challenging environments the planet has to offer and the human technology, endurance, intelligence, and creativity to match those almost unbelievable and unexplored places, all while maintaining absolute military secrecy and stealth.”
—P. J. Capelotti, author of Adventures in Archaeology: The Wreck of the Orca II and Other Explorations

"As Fred's XO during his last WESPAC deployment, I can say without a doubt he has described the trials and tribulations we went through during that period with a largely inexperienced wardroom. As a former skipper of a nuclear attack sub, I can also say he has depicted extremely well what it is like to be in command of such a vessel. Fred was a superb skipper and I have said to many, if I had to go in harm’s way as an XO, I would want it to be with Fred as skipper."
—Captain Ted A. Hamilton US Navy (RET)