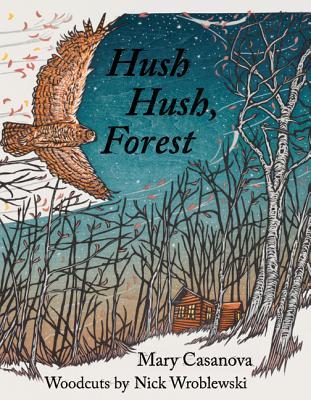 While we are tucked in, snug in warm blankets as we listen to bedtime stories, the woods around us whisper another tale. As the golden leaves waft through the lengthening shadows, the loon sings one last lullaby, the whirring hummingbird takes one last sip, the industrious beaver saws one last branch for her lodge. Here, in enchanting words and woodcuts, is the magic of night falling and winter approaching in the North Woods. Hush Hush, Forest peers through twilight’s window at the raccoon preening, the doe and fawn bedding down, the last bat of the season flitting away. The owl surveys, the rabbit scurries, the bear hunkers, readying her den.

Marking the rhythm between the falling leaf and the falling snowflake, picturing the rituals of creatures big and small as they prepare for the long winter’s sleep, this charming book captures a time of surpassing wonder for readers of all ages—and bids everyone in the hushed forest a peaceful good night.

Mary Casanova is author of more than thirty books for young readers, ranging from picture books such as One-Dog Canoe and Wake Up, Island (Minnesota, 2016) to the novels Moose Tracks (Minnesota, 2013) and Frozen (Minnesota, 2012). Her books have earned the American Library Association Notable Award, Aesop Accolades from the American Folklore Society, Parents’ Choice Gold Award, and Booklist Editors’ Choice, as well as two Minnesota Book Awards. She and her husband live in northern Minnesota near the Canadian border.

Nick Wroblewski is an artist and printmaker specializing in handmade woodcut blockprints; his art is in private collections and galleries throughout the country. He illustrated Mary Casanova’s book Wake Up, Island (Minnesota, 2016) and lives in Duluth, Minnesota, with his wife and two children.

"The narrative soothes and quiets readers' spirits with its gentle and lyrical telling of preparation and rest. A soothing and superb story to read to nature lovers at bedtime."—Kirkus Reviews

"It’s winter in this lovely and lyrical picture book that captures animals preparing for the long cold."—Pioneer Press

"The illustrations are serious, artful and dramatic. The words are more verse than narrative and leave space for our musings and woodland wanderings."—Wilderness News

"As a last book before bed, Hush Hush will set the stage for charming dreams and snuggling under the covers on chilly winter nights."—Lake Superior Magazine

"Casanova's free-form poetry transports the reader outdoors, where the landscape is shifting from fall to winter. In brief but buoyantly descriptive phrases, she unfolds the complex phenology of this ‘shoulder season’— from migration and hibernation to the first snowfall and appearance of the northern lights."—Star Tribune

"With evocative and lyrical word pictures, and beautiful woodcuts, the creators of this book bring readers a spectacular picture of the changing seasons as they are unfolded in the north woods in North America."—Through the Looking Glass Children’s Book Reviews