Terms of Disservice: How Silicon Valley Is Destructive by Design (Hardcover) 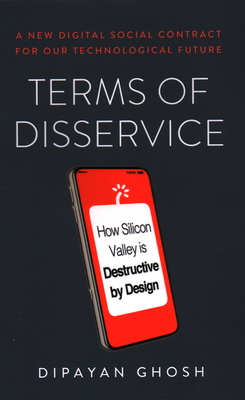 Terms of Disservice: How Silicon Valley Is Destructive by Design (Hardcover)

Designing a new digital social contract for our technological future

High technology presents a paradox. In just a few decades, it has transformed the world, making almost limitless quantities of information instantly available to billions of people and reshaping businesses, institutions, and even entire economies. But it also has come to rule our lives, addicting many of us to the march of megapixels across electronic screens both large and small.

Despite its undeniable value, technology is exacerbating deep social and political divisions in many societies. Elections influenced by fake news and unscrupulous hidden actors, the cyber-hacking of trusted national institutions, the vacuuming of private information by Silicon Valley behemoths, ongoing threats to vital infrastructure from terrorist groups and even foreign governments--all these concerns are now part of the daily news cycle and are certain to become increasingly serious into the future.

In this new world of endless technology, how can individuals, institutions, and governments harness its positive contributions while protecting each of us, no matter who or where we are?

In this book, a former Facebook public policy adviser who went on to assist President Obama in the White House offers practical ideas for using technology to create an open and accessible world that protects all consumers and civilians. As a computer scientist turned policymaker, Dipayan Ghosh answers the biggest questions about technology facing the world today. Proving clear and understandable explanations for complex issues, Terms of Disservice will guide industry leaders, policymakers, and the general public as we think about how we ensure that the Internet works for everyone, not just Silicon Valley.

Dipayan Ghosh is the Pozen Fellow and directs the Platform Accountability Project at the Harvard Kennedy School. A computer scientist by training, he has served as a technology and economic policy adviser in the Obama White House and as a Privacy and Public Policy Adviser at Facebook.