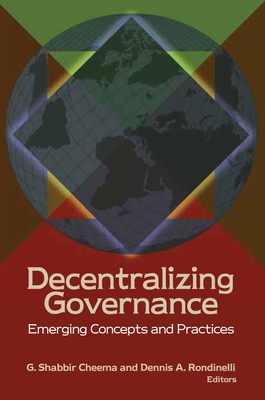 The trend toward greater decentralization of governance activities, now accepted as commonplace in the West, has become a worldwide movement. This international development--largely a product of globalization and democratization--is clearly one of the key factors reshaping economic, political, and social conditions throughout the world. Rather than the top-down, centralized decisionmaking that characterized communist economies and Third World dictatorships in the twentieth century, today's world demands flexibility, adaptability, and the autonomy to bring those qualities to bear. In this thought-provoking book, the first in a new series on Innovations in Governance, experts in government and public management trace the evolution and performance of decentralization concepts, from the transfer of authority within government to the sharing of power, authority, and responsibilities among broader governance institutions. This movement is not limited to national government--it also affects subnational governments, NGOs, private corporations, and even civil associations. The contributors assess the emerging concepts of decentralization (e.g., devolution, empowerment, capacity building, and democratic governance). They detail the factors driving the movement, including political changes such as the fall of the Iron Curtain and the ascendance of democracy; economic factors such as globalization and outsourcing; and technological advances (e.g. increased information technology and electronic commerce). Their analysis covers many different contexts and regions. For example, William Ascher of Claremont McKenna College chronicles how decentralization concepts are playing out in natural resources policy, while Kadmeil Wekwete (United Nations) outlines the specific challenges to decentralizing governance in sub-Saharan Africa. In each case, contributors explore the objectives of a decentralizing strategy as well as the benefits and difficulties that will likely result.

" G. Shabbir Cheema is the principal adviser on governance in the Department of Public Administration and Development Management, within the UN's Department of Economic and Social Affairs. His most recent book is Building Democratic Institutions: Governance Reform in Developing Countries (Kumarian Press, 2005). The late Dennis A. Rondinelli was senior research scholar of public policy studies at Duke University's Center for International Development. Among his books is Beyond Reconstruction in Afghanistan: Lessons from Development Experience, coedited with John D. Montgomery (Palgrave, 2004). "