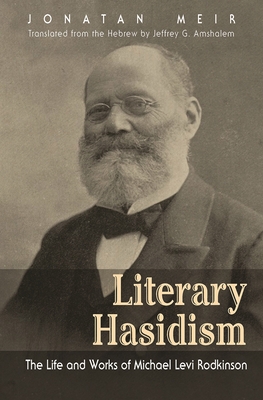 Michael Levi Rodkinson (1845-1904) was a journalist, author, and publisher whose literary projects spanned numerous countries and continents. Hero to some and scoundrel to others, Rodkinson was a polemical figure whose beliefs underwent many transformations over the course of his life, most significantly from Hasidism to combative Haskalah to eventually anticipating the neo-Romantic trends of the early twentieth century. Throughout his career, Rodkinson's writing challenged the familiar genres of the literature of Hasidism and the Haskalah, shaping the religious realities of his readers and articulating a spiritual and community life among Jews, who took his ideas to heart in surprising ways.

Today, Rodkinson is frequently referred to as a minor Hasidic author and publisher, a characterization based on the criticism of his opponents rather than on his writings. In Literary Hasidism, Meir draws upon those writings and their reception to present a completely different picture of this colorful and influential writer. Examining Rodkinson's lifelong role as a catalyzing agent of different cultural phenomena, his diverse publishing activities, and his writings in their respective stages, Meir grants readers a provocative new vantage point from which to consider this divisive, enigmatic figure.
Jonatan Meir is associate professor at Ben-Gurion University of the Negev. He is the author of Imagined Hasidism: The Anti-Hasidic Writings of Joseph Perl and editor of Sefer Megale Temerin by Joseph Perl.