The Seven Lives of Colonel Patterson: How an Irish Lion Hunter Led the Jewish Legion to Victory (Hardcover) 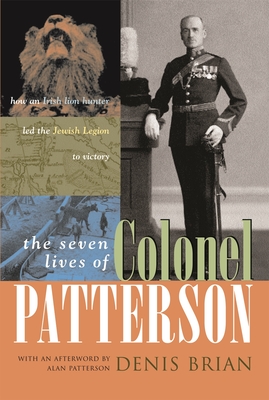 The Seven Lives of Colonel Patterson: How an Irish Lion Hunter Led the Jewish Legion to Victory (Hardcover)

In this first-ever biography of Colonel John Patterson, Denis Brian
reveals his subject to be a diverse composite of identities. An Irishborn
soldier, lion hunter, bridge builder, East African game warden,
author, and Zionist, Patterson's life is a fascinating story, and Brian's
well-researched account gives a revealing look into the ebb and
flow of circumstances that produced such a colorful character.
Brian begins the narrative with Patterson's assignment in East
Africa, where lion attacks are terrorizing workers on a railroad project.
With a storyteller's breathtaking tone, he details accounts of
Patterson quelling the rebellion and killing the lions himself. The
colonel's indomitable energy and courage become a consistent
theme in the book as the author traces Patterson's life from his days
as a British socialite to his recruitment of the Jewish Legion of volunteers
who helped drive the Turks out of Palestine.
Patterson spent most of his later years as an ardent Zionist, working
for the creation of a Jewish homeland until his death in 1947, a year
before the birth of the state of Israel. Drawing on an impressive range
of sources, Brian's biography of this Righteous Gentile is an incisive
portrait of a key figure in both Israeli and colonial British history.