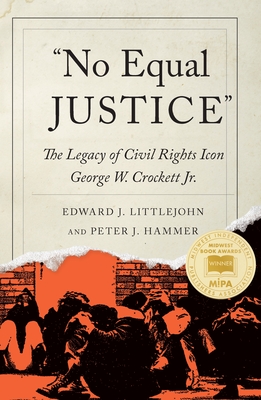 There is no equal justice for Black people today; there never has been. To our everlasting shame, the quality of justice in America has always been and is now directly related to the color of one's skin as well as to the size of one's pocketbook. This quote comes from George W. Crockett Jr.'s essay, A Black Judge Speaks (Judicature, 1970). The stories of Black lawyers and judges are rarely told. By sharing Crockett's life of principled courage, No Equal Justice breaks this silence.

The book begins by tracing the Crockett family history from slavery to George's admission into the University of Michigan Law School. He became one of the most senior Black lawyers in President Franklin Roosevelt's New Deal administration. Later, he played a central role fighting discrimination in the United Auto Workers union. In 1949, he became the only Black lawyer, in a team of five attorneys, defending the constitutional rights of the leaders of the U.S. Communist Party in United States v. Dennis, the longest and most dramatic political trial in American history. At the close of the case, Crockett and his defense colleagues were summarily sentenced to prison for zealously representing their clients. He headed the National Lawyers Guild office in Jackson, Mississippi, during 1964's Freedom Summer. In 1966, he was elected to Detroit's Recorder's Court-the court hearing all criminal cases in the city. For the first time, Detroit had a courtroom where Black litigants knew they would be treated fairly. In 1969, the New Bethel Church Incident was Crockett's most famous case. He held court proceeding in the police station itself, freeing members of a Black nationalist group who had been illegally arrested. In 1980, he was elected to the United States Congress where he spent a decade fighting President Reagan's agenda, as well as working to end Apartheid in South Africa and championing the cause to free Nelson Mandela. Crockett spent his life fighting racism and defending the constitutional rights of the oppressed. This book introduces him to a new generation of readers, historians, and social justice activists.
Peter J. Hammer is the A. Alfred Taubman Professor of Law and director of the Damon J. Keith Center for Civil Rights at Wayne State University Law School. Edward J. Littlejohn is professor emeritus of law at Wayne State University Law School. He is the founder of the Damon J. Keith Law Collection of African-American Legal History at the Walter P. Reuther Library.