Michigan Voices: Our State's History in the Words of the People Who Lived It (Great Lake Books) (Paperback) 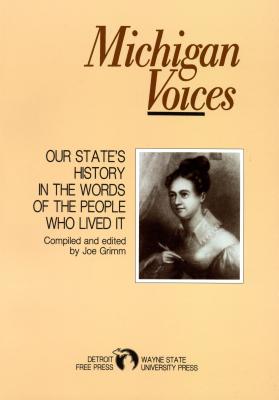 Michigan Voices: Our State's History in the Words of the People Who Lived It (Great Lake Books) (Paperback)

Joe Grimm of the Detroit Free Press has combined a fascinating collection of old family letters, diaries, journals, photos, and other memorabilia in this rare glimpse at Michigan's past. Based on a series of articles that appeared in the "Chronicles" column of the Detroit Free Press Sunday magazine from 1985 to 1987, Michigan Voices introduces the reader to a more personal side of the state's history.
Excerpts from historical documents include Cadillac's proposal of 1700 to establish Detroit and Roger Andrews' crusade for an independent Upper Peninsula in 1916. Among the chronicles Grimm has uncovered are humorous letters from a World War I recruit, an engaging series of correspondences between a Flint schoolgirl and Detroit Mayor Frank Murphy during the Great Depression, and an interview with Kenneth C. Welch, the revolutionary architect and planner who developed the mall/shopping center concept in 1946.

Joe Grimm is recruiting and development editor for the Detroit Free Press.