Adolph Rupp and the Rise of Kentucky Basketball (Paperback) 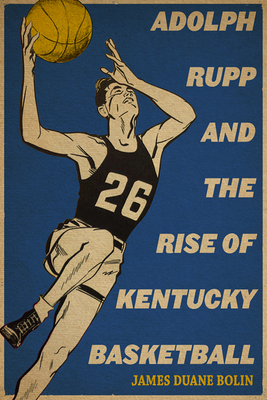 Adolph Rupp and the Rise of Kentucky Basketball (Paperback)

Known as the "Man in the Brown Suit" and the "Baron of the Bluegrass," Adolph Rupp (1901--1977) is a towering figure in the history of college athletics. In Adolph Rupp and the Rise of Kentucky Basketball, historian James Duane Bolin goes beyond the wins and losses to present the fullest account of Rupp's life to date based on more than one-hundred interviews with Rupp, his assistant coaches, former players, University of Kentucky presidents and faculty members, and his admirers and critics, as well as court transcripts, newspaper accounts, and other archival materials. His teams won four NCAA championships (1948, 1949, 1951, and 1958), the 1946 National Invitation Tournament title, and twenty-seven Southeastern Conference regular season titles. Rupp's influence on the game of college basketball and his impact on Kentucky culture are both much broader than his impressive record on the court.

Bolin covers Rupp's early years -- from his rural upbringing in a German Mennonite family in Halstead, Kansas, through his undergraduate years at the University of Kansas playing on teams coached by Phog Allen and taking classes with James Naismith, the inventor of basketball -- to his success at Kentucky. This revealing portrait of a pivotal figure in American sports also exposes how college basketball changed, for better or worse, in the twentieth century.

James Duane Bolin is professor emeritus of history at Murray State University. He is the author of Home and Away: A Professor's Journal, Bossism and Reform in a Southern City: Lexington, Kentucky, 1880-1940, and Kentucky Baptists, 1925--2000: A Story of Cooperation. He lives in Murray, Kentucky.